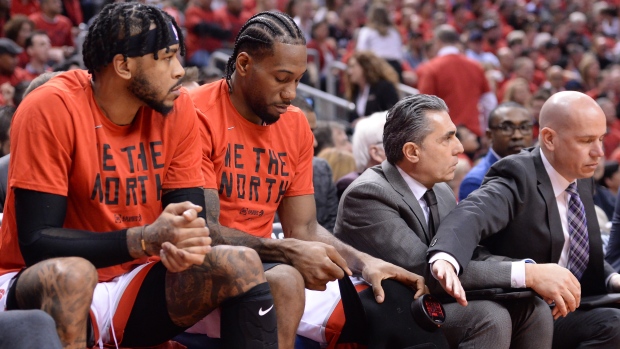 TORONTO — Kawhi Leonard's teammates had long gone by the time he emerged from the nether-regions of the Raptors locker-room to get dressed.

It was 11:29 p.m. local time. Treatment beckoned after leading Toronto to a 118-112 double-overtime win over Milwaukee, cutting the Bucks' lead in the Eastern Conference final to two games to one.

So much for load management. It was Leonard's longest-ever NBA shift.

The reticent superstar, who was limited to nine games last season with a quad injury as a San Antonio Spur, offered little when asked about his health after the game.

Does it feel like you've played 52 minutes, he was asked?

"Definitely. Yeah. I mean it's 52 minutes and it's in the playoffs so you definitely feel it. When you play 30 minutes, you feel it still. (I've) just got to not worry about it, get my treatment and move on to the next one."

"You're on the floor, you're good enough," said VanVleet. "We go out there and go to war for each other. To see him out there battling, and obviously (he) wasn't moving very fast — but if he's out there, he's good enough."

"He's definitely not 100 per cent right now but not many people are," said Lowry, wearing a compression glove on his hand.

Asked how he summons the energy to be a force at both ends of the court, Leonard said "(I) just want to win. That's it.

"We're here. Nobody wants to go home. We want to keep striving and reach that goal. That's it. That's what I pride myself on — both ends of the floor."

While it's hard to tell, Leonard said he was enjoying himself, especially after his injury-shortened 2017-18 season

"This is what we started playing — to have fun. And that's what I'm going out there doing just playing and just enjoying my time. But at the same time you want to win.

"(I'm) just putting it all together and just remembering where I was last year. (I'm) just pretty much enjoying the moment."

Leonard did display a dry sense of humour when asked about Pascal Siakam's two free throw misses with seven seconds left in regulation time and the Raptors leading 96-94. The misses allowed Khris Middleton's layup to tie it with 2.2 seconds remaining and force overtime.

Siakam said later he apologized for missing the free throws.

"I was like 'Damn I damn near played an hour tonight' and he was like 'My bad, (Kawhi). I'll make it up with the free throws next time,'" Leonard said.