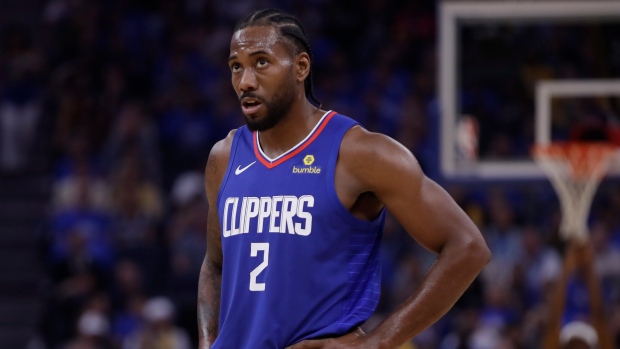 Kawhi Leonard called leaving the Toronto Raptors "a hard choice to make" on Wednesday ahead of his return to the Scotiabank Arena with the Los Angeles Clippers.

"I gave it a big consideration," Leonard replied. "I took my time. I didn't hurry up and make a quick decision. I talked to the front office in detail. It was a hard choice to make."

Leonard said he hasn't thought about the moment he'll receive his NBA Championship ring before tip-off but added that expects it to be special.

"No, I haven’t. I’ll just be in the present and enjoy the moment of getting the ring and play," Leonard explained. "... This is my first time back in the city since the parade. Obviously those flashbacks come back driving over to the arena. Of course it’s a little different tonight, but we’ll see."

Watch the game, beginning with the ring ceremony, LIVE on TSN1, TSN4, TSN5 and TSN Direct at 7pm ET/4pm PT.

The 28-year-old signed a three-year, $103 million contract with the Clippers in July, which included a player option for the 2021-22 season. He said he is expecting a mixed reaction from Raptors fans.

"I mean, there will be some cheers but definitely I think more boos because they want to win the game," Leonard said. "They're not going to be cheering for a player that's on the opposing team."

On Tuesday, a billboard appeared in Toronto's Yonge-Dundas Square featuring a photo of Leonard with the caption "Thank you Toronto" above a New Balance logo. Leonard explained his appreciation for Raptors fans who continued to support the team in the face of adversity.

"They were amazing last year. They rolled with us through the ups and downs," he said. "I was just talking to another media circuit and I was telling them how we were down every series pretty much, except the championship, and they stuck through it with us. They brought great energy to every game and it helped us. So that’s my thank you to them."

Acquired from the San Antonio Spurs ahead of the 2018-19 season, Leonard led the Raptors in points per game last season and was named NBA Finals MVP for his role with the team as the Raptors defeated the Golden State Warriors in six games. He also led the team in playoff scoring with 30.5 points per game.

Leonard added that while's seen photos of the championship ring he'll receive Wednesday, he's yet to see it in person.

"I think it looks nice," he said. "I wanna see it in person so it can come full circle."