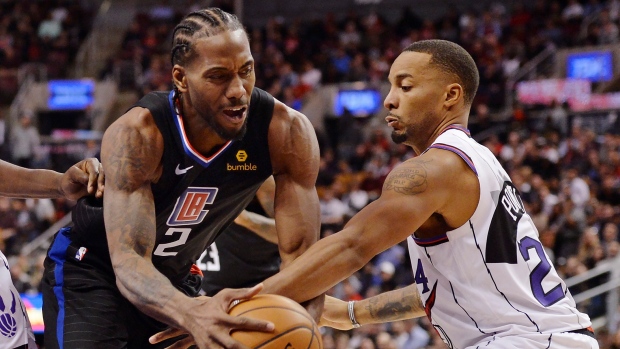 TORONTO — On a night Kawhi Leonard brought fans to the arena early, the former Raptors superstar sent them to the exits early.

Leonard scored 23 points Wednesday to lift the Los Angeles Clippers to a 112-92 rout of his former team, an atrocious game that was decided long before the final buzzer sounded.

Pascal Siakam had 24 points to top the Raptors, who were misfiring all night. They shot a season's worst 8-for-36 from the three-point line, and matched their season low with 31 field goals. Kyle Lowry missed seven of Toronto's threes by himself on a dreadful 1-for-8 shooting night.

"I've had two good games (since his return) and the rest have been (expletive), to be honest," said Lowry, who was playing his fifth game since missing 11 with a fractured thumb. "Right now I'm nowhere near where I want to and need to be."

Pascal Siakam had 24 points, while Norman Powell finished with 22 points for the Raptors (16-8), in their fourth loss in five games. It was Toronto's third consecutive loss at home after going a franchise-record 9-0 to start the season.

OG Anunoby had 13 points and seven rebounds, Marc Gasol added 11 rebounds to go with nine points and Terence Davis chipped in with 10 points for Toronto, which was missing Fred VanVleet for the second consecutive game (right knee contusion).

Leonard, who earned Finals MVP to cap the Raptors' historic playoff run, shot 8-for-14 on the night, and added six assists and five rebounds for the Clippers (19-7), who won for the ninth time in 11 outings.

The game had been circled on Raptors' fans calendars since the season schedule was released. And the early minutes definitely lived up to the hype. The Scotiabank Arena crowd of 20,144 gave Leonard a rousing hero's welcome, chanting "M-V-P!" as he received his NBA championship ring.

"I sat in the locker-room with it for a little bit (after the game)," Leonard said. "Just admired it and just remembered all the memories and all the hard work that went into it."

By halftime, fans had to be wishing Leonard was still on their team.

"We kept telling our guys the way we're playing offensively, we're going to keep scoring," Clippers coach Doc Rivers said. "But if they keep scoring, it's going to be a close game. At some point, one of the two teams is going to play defence and it was us in the second quarter."

Toronto had an early six-point lead, but the game turned on a horrible second quarter. Lou Williams poured in 13 points in the frame. The Raptors had 14 points as a team, and missed all nine shots from long range.

"It looked liked it was going to be a helluva ball game and we went through a really dry spell offensively that deflated us," Raptors coach Nick Nurse said.

The Raptors turned it around to start the third, holding the Clippers to just 1-for-11 shooting, and when Anunoby swatted the ball away from Leonard and raced downcourt for a dunk, it pulled Toronto to within five points with about five minutes left in the frame.

The Raptors' momentum died a swift death soon after. Toronto didn't score a basket over the final 3:43 of the period and trailed 88-71 with one quarter left to play.

Toronto would come no closer than 14 points from that point on, and both coaches emptied their benches in the final dreadful minutes, sending fans to the exits well before the final buzzer.

These two teams had met exactly one month earlier in L.A., but neither team was at full strength. The Raptors were missing both Lowry (fractured thumb) and Serge Ibaka (ankle strain) that night, while Anunoby left the game in the first two minutes after Leonard swatted him in the eye.

The Clippers were missing Paul George, who was recovering from off-season shoulder surgery.

The Raptors hassled Leonard into one of his worst games of the season — 12 points on 2-for-11 shooting and a career-worst nine turnovers in the Clippers' 99-88 win.

"I'd think it would be pretty hard to make him go 2-for-11 and nine turnovers, but it would be really cool if we could," Nurse said before the game.

With the much-anticipated return of Leonard — dubbed the King of the North last season — the night got off to an emotional start. Lowry presented Leonard with his ring at centre-court, and the two hugged.

"I'm going to be connected with Kawhi for life because of what we achieved last year," Nurse said. "And all of us that were in that locker-room are."

"When the ball goes up, the reality is we gotta get to playing and do everything we can to try to beat a great basketball team. This is as deep a talented team as there is in the league."

The Clippers' depth was on full display with seven players scoring in double figures. Williams finished with 18 points, while Maurice Harkless had 14 and George 13.

Anunoby led the way with nine points in a solid first quarter featuring some of the best basketball Toronto had played in a few games. The Raptors went into the second leading 32-27.

Toronto's execution disappeared in a disastrous second quarter. The Raptors led by five early on, but a hook shot by Ivica Zubac capped a 28-10 Clippers lead that put the visitors up by 13 points. Five consecutive points by Williams sent L.A. into the locker-room at halftime with a 64-46 advantage.

The Raptors host the Brooklyn Nets on Saturday and the Cleveland Cavaliers on Monday.