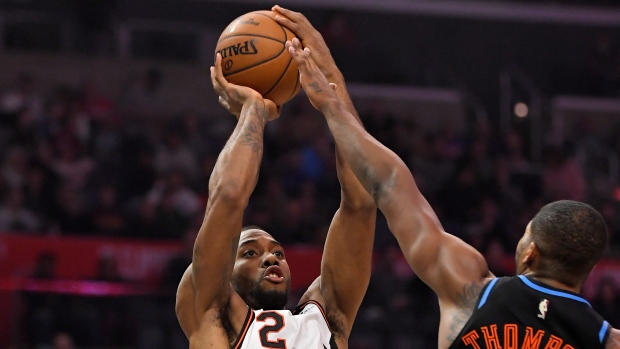 According to Sportradar, it was only the second time since 1996 a Clippers player scored at least 40 points in the first three quarters. Lou Williams had 40 against Golden State in a 2018 game.

Leonard had 14 points in the second quarter and set a career high for 3s in one period with four as the Clippers broke open the game. The All-Star forward played 29 minutes and was 14 of 22 from the floor and 6 of 10 from beyond the arc. He was two points from tying his regular-season career high.

Williams added 24 points for the Clippers, who played again without injured star Paul George. They have won five of six and had six scorers in double figures.

Osman's 3-pointer gave the Cavs a 34-33 lead with 9:58 remaining in the second quarter before Los Angeles outscored them 33-16 the remainder of the half.

The Clippers scored the final 13 points of the first half, including nine from Leonard. He closed the half by intercepting Osman's pass and going down the floor for a dunk while drawing a foul from Garland. Leonard's free throw completed the three-point play to put Los Angels up 66-50 at halftime.

The Clippers' largest lead was 36 early in the fourth.

In a matchup of two franchises celebrating their 50th year, the Clippers wore their Buffalo Braves uniforms. The franchise started in Buffalo before moving to San Diego in 1978 and changing their name to the Clippers. They relocated to Los Angeles in 1984.

The Cavaliers donned the uniforms they wore from 1994-2002, which was fitting since it was 1990s Night at Staples Center.

Cleveland forward Tristan Thompson gave former coach Tyronn Lue a bearhug on the Clippers sideline before the game. Lue is in his first season as an assistant on Doc Rivers' Clippers staff after he was fired by the Cavaliers six games into last season.

The Cavaliers faced LeBron James on Monday night for the third time since he signed with the Los Angeles Lakers during the 2018 off-season.

Cavaliers: Kevin Love got the night off with Cleveland playing back-to-back games. Love has played a back-to-back set only once this season. ... Larry Nance Jr. returned to the lineup after missing the past seven games due to left knee soreness. He was scoreless in 19 minutes with three rebounds and four assists.

Clippers: George missed his third straight game due to a strained left hamstring. Rivers did not have an update before the game on when the All-Star forward might be back. ... Maurice Harkless had 11 rebounds.

Cavaliers: At the Memphis Grizzlies on Friday. Cleveland won the first meeting 114-107 on Dec. 20.

Clippers: Host the Orlando Magic on Thursday. Los Angeles has won the last 11 in the series.