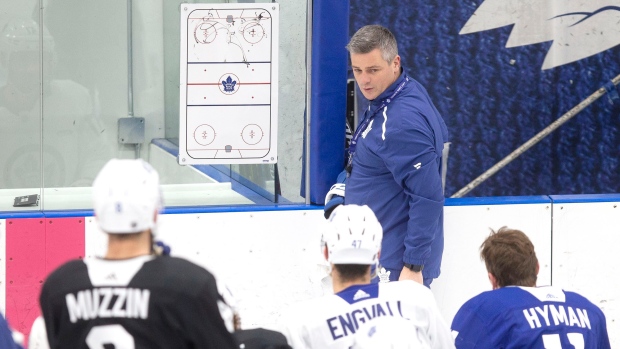 TSN Toronto reporter Mark Masters checks in daily with news and notes on the Maple Leafs, who practised at Ford Performance Centre on Monday. The Leafs’ next game is Wednesday night against the Red Wings in Detroit.

Sheldon Keefe started his first home practice as Leafs head coach with a couple skills-specific sessions guided by the player development staff, including consultant Darryl Belfry. And while some players participated in these types of sessions during the Mike Babcock era it was never built into the main regular season practices.

"I come from a background where development is a priority," said Keefe, who previously coached in the OHL and AHL, "and while performance is the priority here, continuing to develop the players is important. I'm trying to start at stage one for what 'd like to do and what I'd like to incorporate and I've had a lot of success with the Marlies in utilizing the resources that we have around us, in particular, with the player development staff. They do a terrific job. They know what my expectations are in terms of working the skills within the structure and I thought it was a great way to introduce some of the concepts we want our players to focus on offensively."

At one point there were nine coaches and members of the development staff on the ice, including senior director of player development Scott Pellerin and skill development consultant Nik Antropov. First, the defencemen went through 20 minutes of work, which seemed to be focused on starting the rush. Then they were joined by the forwards for 20 more minutes of work. General manager Kyle Dubas watched the proceedings from the glass and at times appeared to be shooting video on his phone.

These sessions took place on the Marlies pad where not long ago Keefe was still running AHL practices and where he often oversaw these types of workouts.

Monday's team-wide work was focused on offensive-zone play and finding success off the cycle. Auston Matthews was involved in a session like this a couple weeks ago, but it happened after the main practice. Back then it was Matthews, William Nylander, John Tavares and Jason Spezza on the ice with Belfry. Matthews likes the idea of getting everyone involved.

"Offensively, when you get your whole line out there and D you kind of read off of each other and then you're not really thinking as much in the game," Matthews observed, "you kind of know the different spots and practising different things that you can apply into a game scenario. It's nice to do stuff one-on-one or with a small group of guys, but once you get the whole team going I think there's a lot of benefits that can be had from it."

After the initial sessions, the Leafs relocated across the hallway to the main team pad and focused on putting the skills just learned into action.

"Making it part of practice, you know, I think can continue to benefit our group with the type of skill-sets that we have," said Tavares, "the type of team that we have and continuing to push the envelope, keep improving and make our game better. You see it in a lot other sports, I think, and you’ve certainly seen it in goaltending for a long time in hockey."

One of the first things Keefe mentioned upon taking over was that he wanted to boost the spirit of the group. The Leafs had lost six straight before Babcock was let go so it made sense, but Keefe says keeping tabs on the energy levels of the team is something that will always be on his agenda.

"Fundamentally I believe that is a priority and we want to make it a priority, we want to be a team that's thriving and we want an environment that’s vibrant," Keefe said. "We're trying to work on those things consistently and doing the things that, as a staff, we can control to set the environment. And then it’s through how we communicate with our players and how we handle them and how we handle our scheduling and practices and all those types of things and keep it a situation where our players are engaged."

It's only two games, but there's been a notable change in the body language of the players both in games and just around the rink. A few guys, for example, were having fun making snowballs outside the practice rink in Denver on Friday. Out with a high ankle sprain, Mitch Marner joined the team for the last two games of the trip and was pulling pranks by hiding the gear of his teammates.

"Everyone in this room has a lot of skill and ability in their bodies to do a lot of great things and I think people just weren't doing it," Marner observed. "Their minds just weren't thinking freely and, I mean, you can see the last couple games, I think a couple of those guys are just kind of out there having fun with the puck and doing their skills and doing their thing and it's helped our team out a lot."

So much of the talk before the coaching change revolved around defence and the group's shortcomings in that department, but Keefe is also stressing offence.

"I think the fact that we've tried to tap into the offensive abilities of the players and pairing that with the needs that we have for them defensively I think has created a little more excitement," Keefe said, "and perhaps a little more willingness to give a little extra on the defensive side of it, because they know they're getting some freedom offensively to go. But also just knowing that part of our defensive plan is to be good with the puck and on offence and that suits the group really well, I believe, and the response has been positive."

In the wake of Babcock's firing last Wednesday, questions were raised about whether the coach's old-school tendencies were meshing with the young group.

Terry Koshan of the Toronto Sun reported that in the 2016-17 season Babcock "was alleged to have asked one of the Leafs' rookies to list the players on the team from hardest-working to those who, in the eyes of the rookie, didn't have a strong work ethic. The rookie did so, not wanting to upset his coach, but was taken aback when Babcock told the players who had been listed at the bottom."

During an interview with TSN on Monday, Marner confirmed this story was about him.

"I'd say it's just surprising," Marner revealed, "but, you know, it's so long ago now, honestly, I really kind of forgot about it until the report came out. But it’s over with now, it’s done with. I was lucky that the guys that were there with me, none of them took it to heart. They knew it wasn't up to me."

What did the support of his teammates mean to him at that time?

"It was huge for a first-year guy," Marner said. "I didn't really know what to think, but I was lucky enough to have that first-year group with me and our team was very tight and very well-knit together and, you know, it was a lucky situation. But, like I said, it’s over with now and it’s out of my head, I’m looking forward to the future here with Sheldon and seeing what I can do to help this team."

Did Babcock cross a line?

"I mean, like I said, it was my first year, I didn't really know really what to think of it. But it's over with now, nothing really I can say. I'm looking forward to the new change and seeing how I can help this team win with Sheldon."

In a statement issued to TSN Insider Darren Dreger, Babcock said, "I was trying to focus on work ethic with Mitch - focusing on role models - it ended up not being a good idea. I apologized at the time."

Alexander Kerfoot has been suspended two games for boarding Erik Johnson in Saturday's game against the Colorado Avalanche in Denver.

"First and foremost, I’m disappointed in myself," the 25-year-old said. "It, obviously, was a bad play. I know Johnson well and I just hope he's all right. I hope that he doesn’t miss any time or anything like that, because I feel terrible about the incident and obviously didn't mean to do it by any means."

Johnson missed Colorado's practice on Monday and is listed as day-to-day.

Kerfoot was playing his first game back in Denver since being traded in the summer, but insists the added emotion didn't contribute to his lapse in judgment.

"He’s a big guy," Kerfoot recalled. "He skates really well. I was just trying to get a piece of him before he cut up the ice and he kind of, unfortunately, lost possession right as I was pushing him and then as he stumbles I push him into the boards. But it’s no excuse. It was unfortunate timing, but it was also a bad play by me. I just hope he's all right. I'm close friends with him and don't mean to hurt him by any means or put him in a vulnerable position."

It's Kerfoot's first career suspension. He'll miss games in Detroit on Wednesday and Buffalo on Friday.

"I saw him after the game and apologized," Kerfoot said. "Obviously, there's not much you can say. You can apologize all you want, but it’s something you shouldn’t be doing on the ice. I just tried to make it clear that by no means did I mean to do it and I hope he's all right, but there’s nothing that’s going to take it back."

Kerfoot has struggled with discipline issues this season taking nine minors (tied for the​ team lead) in 22 games (0.41 per game). He took 19 minors in 78 games last season (0.24 per game).

Frederik Andersen didn't skate with the main group today instead going through a session with goalie coach Steve Briere. Keefe explained that Andersen wouldn't benefit much from the main group's session.

After practice the team assigned Kasimir Kaskisuo to the Marlies and recalled Michael Hutchinson. Kaskisuo allowed six goals in his first and only NHL start in Pittsburgh on Nov. 16 in what ended up being the second-last game of Babcock's tenure.

The Leafs will play a home-and-home set on Friday and Saturday against the Sabres so Hutchinson likely gets one of those games. Keefe was asked if he has philosophy on how he'll use his goalies in back-to-back situations.

"My position on it is that I don't think I have one position," the coach said. "Each situation is unique and we will look at each situation as that and make an appropriate decision."
---

Morgan Rielly took part in the first skills session before departing to get some rest. The defenceman has been bothered by a nagging issue throughout the season.