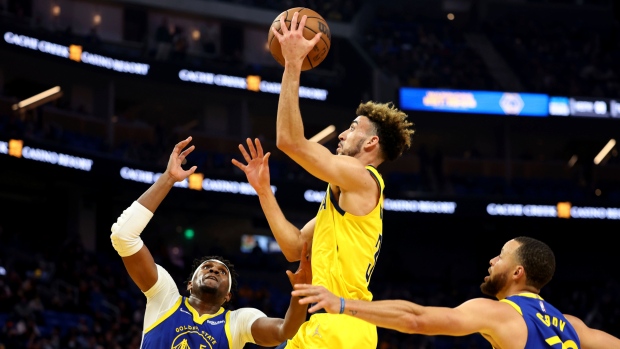 SAN FRANCISCO (AP) — The Golden State Warriors were frenzied, rushing shots and being careless with the basketball. It led to perhaps their worst loss this season to an Indiana team with a handful of injured stars watching in street clothes.

Keifer Sykes hit a go-ahead 3-pointer with 1:41 left in overtime and a layup the next possession, Chris Duarte scored 27 points and the undermanned Pacers beat Stephen Curry and the Warriors 121-117 on Thursday night.

Golden State got one last chance with 6.4 seconds left after a jump ball and Klay Thompson checked in but couldn't get a shot off.

“We were definitely sped up a little bit, 9 for 42 from 3, but it wasn’t a great game in terms of our execution to get those 42 3-point shots,” coach Steve Kerr said. “I don’t think we earned the right to make a lot more than that. It just felt like we were scattered out there and in a rush for sure.”

Curry scored 39 but none in overtime, missing a 3 from the top of the arc with 16.5 seconds left. He had a tying layup with 2:44 left and four free throws in the final 34.5 seconds of regulation, but Golden State surrendered Justin Holiday's tying 3 with 6 seconds left to send the game into OT.

“As far as the 3-point shot that tied it, I’m normally a fouler and I take the hit on that one, too. This was my night to stink it up,” Kerr said.

Duarte hit clutch jumpers late in regulation as the determined Pacers hung tough on a night they were missing the starting backcourt duo of Malcolm Brogdon and Caris LeVert, along with starting center Domantas Sabonis because of injuries.

Juan Toscano-Anderson, who had a key 3 with 3:19 to go, rebounded Torrey Craig's miss with 15.7 seconds left and Curry converted free throws.

Indiana center Goga Bitadze was ejected with 6:44 left following his second technical after fouling Gary Payton II, who went over the 6-foot-11 center for a left-handed slam and also was whistled for a technical.

“I didn't say anything,” said Payton, who scratched his head after the dunk and stared at Bitazdze, who appeared to try to head butt the Warriors star.

Thompson drove to the basket for a pretty reverse layup in the second quarter and again showed signs of his old dominant self after returning earlier this month from a 2 1/2-year absence following surgeries on his left knee and right Achilles tendon. He missed all seven of his 3-point tries and Golden State's players aside from Curry were 0 for 14 from deep until Damion Lee connected with 40 seconds left in the third.

"Just got to give it time," Kerr said.

Curry had 18 points by halftime to help Golden State build a 63-55 lead and wound up 12 of 27 with six 3-pointers. Kevon Looney grabbed 15 rebounds for his career-best fourth straight game with double-digit boards. DeMarcus Cousins was the last Warriors player with 10 or more rebounds in four straight games, doing so in five in a row from Feb. 12-28, 2019, according to Elias.

Indiana snapped a four-game losing streak with a 111-104 road win against the Lakers on Wednesday. The Pacers take on the top two teams in the Western Conference in consecutive games when they play at Phoenix on Saturday.

The Warriors dropped to 10-1 this season facing the Eastern Conference.

Golden State canceled practice Wednesday and had a fun game of Home Run Derby instead.

“Everyone's tired from all the travel over the last month or so, just felt like a good day to unwind and do something fun, ” Kerr said. “... Klay was good. I know you're going to be shocked that Steph and Klay were both excellent.”

Wilhelmina Attles, a former teacher in Oakland and wife of Warriors Hall of Famer Al Attles, was honored on Educators Appreciation Night and the Oakland Unified School District declared Jan. 20 “Mrs. Attles Day.” She left the court in tears after the halftime ceremony, clearly touched.

The Warriors recorded their 400th straight sellout spanning the regular season and playoffs — excluding the limited capacity for fans last season because of the COVID-19 pandemic. The streak dates to Dec. 18, 2012, against New Orleans.

Pacers: Brogdon has right Achilles tendon soreness, LeVert a sore right calf and Sabonis a sprained left ankle. ... Indiana improved to 5-17 on the road with its third straight victory on the Warriors' home floor.

Warriors: Rookie Jonathan Kuminga, in the starting lineup during Draymond Green's injury absence, was hit with his first career technical for making contact with Lance Stephenson midway through the second. ... Otto Porter Jr. sat the first game of a back-to-back while Thompson and Andre Iguodala are set to rest Friday vs. the Rockets. ... The Warriors still hope C James Wiseman, recovering from right knee surgery, will begin scrimmaging with contact soon but limited scheduled practices has made that challenging along with the big man needing the knee flushed to relieve swelling last month. “At this point I’m also aware I’m the boy who cried wolf a little bit,” Kerr said. “When it happens, it happens and we’ll let you know.”

Pacers: At Suns on Saturday night.

Warriors: Host Houston on Friday night to complete a back-to-back having won four straight vs. the Rockets.