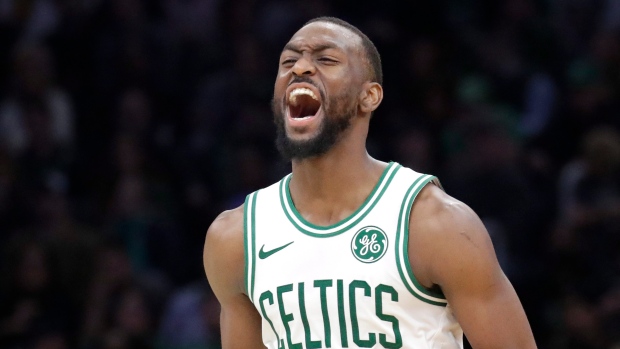 CHARLOTTE, N.C. — Kemba Walker says he holds no ill feelings toward Michael Jordan, even though the Hornets owner and six-time NBA champion decided not to keep him in Charlotte by paying him a $221 million supermax contract.

In fact, Walker only has love for Jordan.

"MJ is always going to be a special guy in my life," Walker said Thursday night after his return to Charlotte as a member of the Boston Celtics. "He's one of the reasons I am where I am today."

Jordan drafted Walker with the ninth pick in the 2011 NBA draft, and Walker took it from there. He beat out DJ Augustin for the starting point guard spot and flourished into a three-time All-Star despite being undersized — he's listed at 6-foot — for his position.

Along the way, he became tight with Jordan, and the two still talk regularly. Although Walker said they didn't have a chance to catch up Thursday, he said he feels like he can talk with Jordan anytime.

Walker scored 14 points and had six assists as the Celtics beat the Hornets for their sixth straight win.

Walker's mother, who still lives in Charlotte, was in the stands.

It was an emotional night for Walker.

The Hornets showed a highlight video of Walker during pre-game introductions, which brought tears to his eyes.

After that, the crowd gave Walker a loud, one-minute standing ovation.

"It was amazing," Walker said after the game . "Just a great feeling to know that they still have love for me even though I left. But you know, to be back and to get the reception I got was really cool."

It was clear Walker was missed.

His longtime friend Cody Zeller honoured him with a pair of sneakers that had the Charlotte skyline graphic reading "We Miss You Kemba." Walker said he misses Zeller and some of the young players he was mentoring on the team like Devonte Graham, Dwayne Bacon and Miles Bridges.

He joked that Graham has stolen some of his moves.

"For sure! Definitely stole some of them. Definitely," Graham said with a laugh. "When you've got a great guy like that, great point guard in this league you watch him, got to watch him the whole year so I definitely take some of his stuff from him."