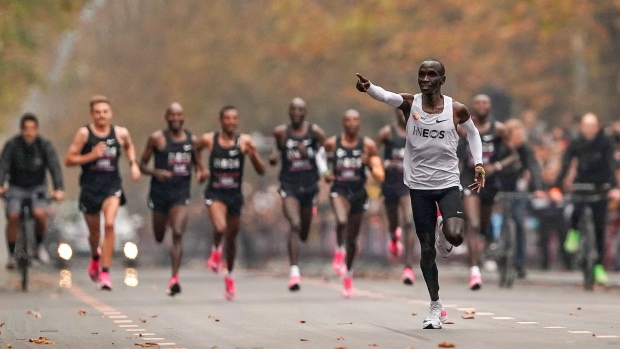 It may not have been official, and it may have used some unusual aids to get there, but regardless of how he did it, a man ran 42.2 kilometers in less than two hours.

Kenya’s Eliud Kipchoge broke the marathon barrier on a run in Vienna, Austria Saturday morning, accomplishing something no one had thought possible just a few years ago.

Think about what he did for a moment – he ran at a pace of 2:50 per kilometer 42 times. Or, to put it in terms the average human might be able to understand, it would be running around the track at your local school 104 times, each lap taking no more than 68 seconds.

Most of us couldn’t run 200 meters at the pace Kipchoge maintained for one hour, 59 minutes and 40 seconds.

“Today we went to the moon and came back to earth,” the 34-year-old wrote on Twitter. “I am at a loss for words for all the support I have received from all over the world.”

As he came to the finish line, assured that he was going to break the mark, the Olympic gold medalist and world record holder pointed at people in the crowd, pumped his chest twice and clapped his hand. A wide smile broke out on his face and he raced into the arms of his wife before a throng of people embraced him.

Perhaps most remarkable of all, he didn’t even look tired.

Kipchoge established the record at a run set up precisely to try and break the mark. The INEOS 1:59 Challenge came two years after a similar attempt co-ordinated by Nike. At that time, Kipchoge finished 26 seconds over the two-hour mark.

This time around, organizers took many of the same tactics used in the first attempt and added a few wrinkles. Kipchoge was helped along the way by a phalanx of 41 pacers who rotated throughout the run. There was also a car ahead of the runner, shining a laser on the road to indicate the pace he had to maintain. And once again, he wore a special pair of Nike shoes designed to give him every advantage.

The first attempt was done on a racetrack in Monza, Italy with very few fans. This time the crowd lined every part of the route, cheering the Kenyan on which likely buoyed him along.

Add it all up and it led to a record-breaking performance on par with Roger Bannister running the first mile in under four minutes. The time won’t sit as the official world record as it wasn’t done in open competition. No matter – Kipchoge still has that mark of 2:01:39.

While the time was stunning, top runners had a sense that the record might fall.

“Honestly, I wasn’t too surprised,” said Reid Coolsaet, one of Canada’s top marathoners and a two-time Olympian. “He only, well maybe I shouldn’t say only, but he only had to run 26 seconds faster which is a second per mile so it seemed well within reach. This time he had the advantage of knowing he only had to take off a little bit.”

In a post-race interview, Kipchoge said that he believed breaking the mark might lead to more sub-two hour runs, much as Bannister’s achievement in the mile opened the doors in that distance.

While Coolsaet agreed that the effect could be similar, he felt that it would still be a difficult time to run in an official event.

“I think it will have that sort of effect, but I don’t think the floodgates will open,” said at 40-year-old who will toe the line at next week’s Scotiabank Toronto Waterfront Marathon. “It’s just so much harder to find pacers in the marathon and you can only race the marathon two or maybe three times a year.”

The record is stunning and many are still trying to grasp the full weight of the achievement. Does it hold up even though it was done in a manner that gave Kipchoge every advantage?

“One of my friends asked me, is this gimmicky or truly amazing?” stated Coolsaet. “I said it was both.”

With the two-hour barrier now broken, the future of the marathon could be exciting to watch.