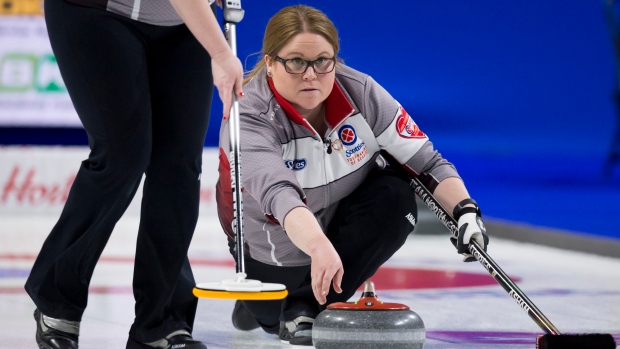 MOOSE JAW, Sask. — If Kerry Galusha is skipping Northwest Territories at the Canadian women's curling championship for the last time, it's an uncomfortable swan song.

Her 13th year calling the shots for a territories team ranks third in all-time appearances by a skip behind Nova Scotia's Colleen Jones (18) and Manitoba's Jennifer Jones (15).

The small pool of competitive curlers in the north, the complicated travel and the prohibitive cost of it to play World Curling Tour events puts northern representatives at a disadvantage in national championships.

Galusha felt she had a lineup to overcome those hurdles this season.

Injury forced the 42-year-old Yellowknife skip to alter that lineup, however.

She's throwing second stones at the Scotties Tournament of Hearts in Moose Jaw, Sask., because of a troublesome gluteal muscle.

While throwing a fourth-end peel "something just pulled in my butt," she said Monday.

"I was in so much pain. I didn't know if I was going to be able to finish the game. I did and we won the bronze medal.

"Ever since then, it's been a very long road back. It was one of my better seasons and for that to happen, it's super disappointing."

Sarah Koltun is Galusha's vice. Shona Barbour has played lead for Galusha in a dozen Tournament of Hearts.

Galusha earned a pair of wins Monday to get to 2-2 in Pool B.

Back-to-back games were not kind to Galusha's sore left haunch, however.

"I thought I was going to have to sit out and then I think the Advil kicked in in the fifth end and it felt better," she said.

Manitoba's Kerri Einarson remained undefeated at 4-0 atop Pool A ahead of Northern Ontario, Saskatchewan and Alberta all at 3-1.

Ontario and the Jones wild-card team joined Nova Scotia at 3-1 at the top of Pool B.

The top four teams in each pool advance to the championship round starting Thursday and carry their records with them.

The top four teams in the championship pool advance to Saturday's Page playoff. The semifinal and final are Sunday.

Galusha is managing her leg with stretching, massage and extended warmups before draws.

Her shotmaking of 79 per cent ranks fifth among all seconds in the tournament.

"I didn't know even coming here how I was going to curl," the skip said. "So far I'm throwing really well."

If you add in the years NWT lost out in the short-lived pre-tournament qualifier and her appearances as an alternate, Galusha is participating in her 17th Hearts.

Her Alberta-based brother Kevin is a four-time Canadian champion.

The leg injury has Galusha leaning towards retirement from competitive curling.

"If I do curl another year, I probably won't go as hard," said Galusha, a finance officer for the NWT government.

"I'll curl for fun, which is kind of weird because you don't want to come to the Scotties and curl for fun.

Galusha has never made Hearts playoffs, but her underdog teams pulled off memorable upsets.

Galusha beat defending Canadian champion Jones in the round robin in 2009.

She bested both defending champion Amber Holland and eventual champion Heather Nedohin in the preliminary round in 2012.

"I feel like we represent the north really well every year," Galusha said. "Even tomorrow, when we play Homan and Jones, they know we're a decent team even though we're Team NWT."

Galusha isn't sure who she'll pass the curling torch to given the few teams that enter territorial playdowns.

"In a couple years we might see a team be really good here, but right now there really isn't anybody behind us coming through," she said.

"I don't know who is behind us to come here, to be honest."

Galusha is doing her part by coaching her daughter Sydney.

"She just got here this morning, so maybe she was my lucky charm," her mother said.

"My 10-year-old daughter is a very good curler. She's going to be way better than me."

If that is the case, expect to see Galusha at future Hearts.

"I'll probably be back at the Scotties coaching," Galusha said.