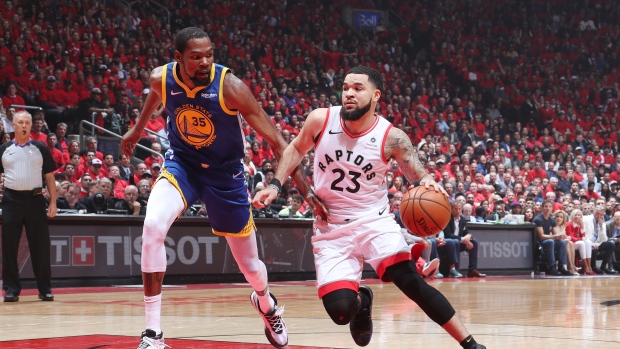 On Tuesday, Kevin Durant joined Hot97’s Ebro in the Morning, and his conversation with the group covered many topics. At one point, the Toronto Raptors were discussed and he had high praise for some of the younger players on the team.

"Fred VanVleet. He's stamped to me as a dog in the league. He gonna be in the league for a long long time, however long he wants to play. Durant added, “As an undrafted player, a lot of young guys should be looking at Fred VanVleet.”

Durant was asked if he was impressed with Toronto’s ‘role players’ in the NBA Finals.

The 31-year-old added: “The NBA culture is so open, everyone knows each other so much, you see all of these guys throughout the summer and see how much they progress over the years.”

In the interview, Durant spoke the recovery process of his torn Achilles, “I’m still human.” He said with a smile, “It takes a lot of time, it’s an everyday process. It’s tough to dive into it every day, just two-to-three hours of rehab.

When asked if Brooklyn Nets fans should expect to not see him play this season he responded with a simple, “Yeah.”

Aside from the Raptors and his injury, some things Durant discussed were Kawhi Leonard, a Clippers vs. Lakers conference final, why players don’t want to play for the New York Knicks, and Drake.