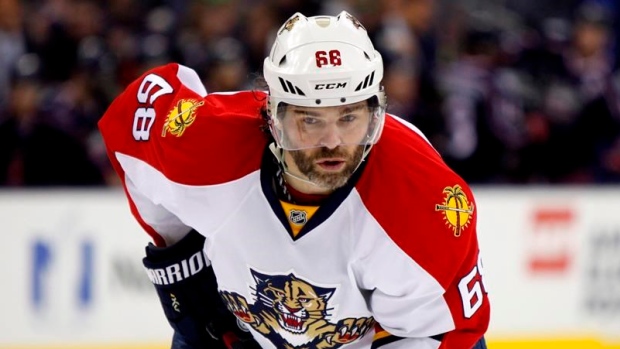 Veteran winger Jaromir Jagr remains without an NHL contract as training camps continue across the league.

Jagr has stressed he's waiting for the right fit in a team and has said he's willing to wait out the start of the regular season in the Czech Republic.

The 45-year-old said earlier this off-season he'd prefer not to sign in the KHL because he'd be unable to return to the NHL mid-season, but he may now have an offer on the table.

Jagr spent last season with the Florida Panthers, scoring 16 goals and adding 30 assists while appearing in all 82 games. He became the league's second-leading scorer all-time last season, with his 1,914 points trailing only Wayne Gretzky.

He confirmed to Eronko on Tuesday the KHL may be his best option if he can't land an NHL job as he looks to earn his spot on Team Czech Republic for the 2018 Olympic team.

"KHL is possible cause if I'm not in NHL then I want to go to the Olympics," Jagr said. "I want to try to make the team. And if I want the Olympics, I have to play in the best possible league, that's what the KHL is."

Jaromir Jagr: 'There're 3-4 teams we talk to. If I know for sure it's no NHL then I gonna look for something else in Europe'

Neftekhimik is 6-3-1 this season and sit one point out of a KHL playoff spot.

Jagr played parts of four seasons for KHL side Omsk Avangard earlier in his career.