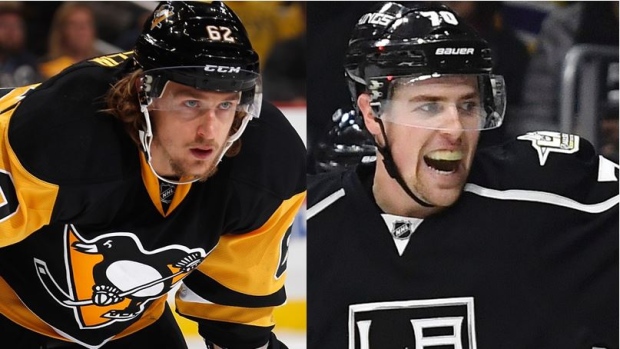 "He's off to a slow start this year, but he's had a good career," Penguins general manager Jim Rutherford said of Pearson on Wednesday. "I believe a change will be good for him and he'll be a good fit for us. He's a little younger than Carl, he's locked into a contract for a couple of years that we like.

Hagelin, 30, has one goal and three points in 16 games this season with a plus-8 rating. He carries a $4 million cap hit this season in the final year of his current deal, though TSN Hockey Insider Pierre LeBrun adds the Penguins retained $250,000 to make the deal an even swap in salary this year.

The Kings sit last in the NHL this season with 11 points through 17 games, while the Penguins are seventh in the Metropolitan Division with 17 points in 16 games.

"This could be the start of more changes. We'll see how it goes," Rutherford added. "The way things have gone, it's obvious that we had make a change. I feel bad - Hagelin is a popular guy. I like him a lot personally. He was part of winning a Cup... but changes are necessary."

The Penguins have acquired forward Tanner Pearson (@tannerjpearson) from the LA Kings in exchange for Carl Hagelin.

Pearson's contract carries an average annual value of $3.75 million and he is signed through the 2020.21 season. Details: https://t.co/hRFEwMpUb5 pic.twitter.com/59sci5oAso

Rutherford added some excitement to his media conference for his three-year contract extension with the Penguins earlier on Wednesday, when he announced the trade was coming. The general manager said he couldn't elaborate on who'd been traded, but told members of the media, "See you guys in about a half hour."