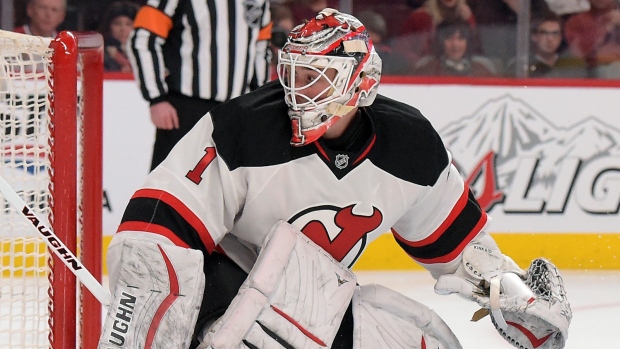 NEWARK, N.J. - Having the New Jersey Devils' first Stanley Cup championship team on hand for a 20th-anniversary celebration seemingly rubbed off on the current team.

Adam Henrique scored two goals and Keith Kinkaid had 25 saves in his return to the lineup to lead the Devils to a 5-2 victory over the Philadelphia Flyers on Sunday night.

"I saw their eyes when they were sitting there," Devils general manager and president Lou Lamoriello said of his team's reaction during the pre-game ceremony in which stars like Scott Stevens, Marty Brodeur and Claude Lemieux were introduced to the fans. "How could you not, sitting there, and listening to the names, not only players who were with us but those who went to other teams in great careers."

Henrique said it was special sitting on the bench and understanding what that team accomplished. They were underdogs in the finals against the Red Wings and won playing for each other.

"The group that they had and the leadership...all the players on the team bought in and everybody had their role and played together as one," Henrique said.

The current team did all the little things on Sunday night.

Jacob Josefson broke a second-period tie with a short-handed goal and defenceman Eric Gelinas added a power-play tally to help the Devils bounce back from a disappointing loss to Columbus and send the Flyers to their second loss in two days.

Stephen Gionta also scored and Steve Bernier added three assists in the game between teams whose playoff hopes are fading.

Ryan White and Michael Raffl scored for the Flyers, who did not seem at their best after blowing a late lead to Boston on Saturday before losing in overtime. Steve Mason had 16 saves.

The result left Philadelphia seven points behind Boston in the race for the final wild-card spot in the Eastern Conference. The Devils are 10 behind the Bruins, who have played two less games than the Flyers and one less than New Jersey.

"We've been in deep trouble all year," White said. "We have kept chipping away, getting wins here and there, but we have to play better than what we did today."

The big goal for the Devils was Josefson's fourth of the season. With Devils' defenceman Adam Larsson off for hooking, defenceman Andy Greene sent a pass that Josefson carried into the Flyers zone and dropped to Gionta. Mason made the save on Gionta's shot but Josefson got the rebound and scored for a 2-1 lead.

Gelinas made it 3-1 late in the second period with a blast from the point that may have deflected off Pierre-Edouard Bellemare with 1:51 left in the period.

Henrique made it a three-goal lead with a 2-on-0 break with Bernier. Henrique carried the puck into the Flyers end, sent a pass to Bernier and slammed dunked the return pass into an open net.

"It was fun to be around them (the 1995 team)," Henrique said. "I was five years old at the time, but it was fun to hear the stories about what they had to go through to win."

Raffl got the Flyers to 4-2 with a short-handed goal with just over 8 minutes to play and Philadelphia nearly cut the margin to a goal a little more than a minute later but Sean Couturier could not finish a chance in front.

Seconds later, Patrik Elias sprung Gionta for a breakaway and he beat Mason for his fourth goal of the season.

"We're just not good enough," Flyers forward Wayne Simmonds said. "We should have been angry a long time ago. We made a few mistakes and they made us pay. Today was awful and everyone knows it. We weren't battling at all. We turned the other way. They got pucks deep and made us pay."

NOTES: Scott Gomez had two assists and he now has 476 points as a Devil, tying him with Scott Niedermayer for fourth in team history. He also has 355 assists, moving past John MacLean for third in team history. ... The Devils took the season series 3-1. ... Flyers D Niklas Grossman missed his fourth straight game with an upper-body injury while fellow D Michael Del Zotto is expected to be sidelined 7-to-10 days with an upper-body injury. ... Flyers D Mark Streit was a minus 4 for the game. Greene was plus 3 for the Devils.