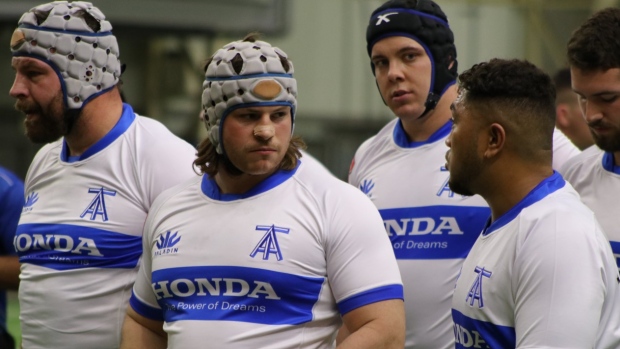 While the game may be the same, the Toronto Arrows fly half says the weather takes some getting used to. The temperature Friday morning in Toronto was a frigid -17 C with the wind chill making it feel like -24.

"I came over from New Zealand where we were in the middle of our summer there. Coming over to the snow and the cold has probably been the biggest adjustment," Adams said. "But I've enjoyed it so far and I'm living with a good group of (Arrows) guys so it's been good."

The 26-year-old Kiwi gets a break from the elements as the Arrows leave the Toronto deep freeze for the warmth of Las Vegas, home to four Major League Rugby games this weekend.

The Arrows, 38-10 winners in Austin, Texas in their season opener last weekend, take on the Houston SaberCats on Sunday at Sam Boyd Stadium where a high of 22 C and sunshine are forecast.

Houston is coming off a 21-12 home victory over Colorado.

Adams landed in Toronto through his skills — and a little bit of good fortune. Arrows backs coach Peter Smith found him playing in the Shute Shield competition in Australia.

"(Smith) was home in Australia, he wasn't busy, went to a game and came across him playing in the Shute Shield," recalled Chris Silverthorn, Toronto's director of rugby. "He called me from the sideline and says 'I think we've found our next (No.) 10.' So here we are. It was kind of a fluke thing."

Adams, a former Junior All Black and Melbourne Rebel who played in the Shute Shield for West Harbour and Eastwood, said he accepted the Arrows' offer because of the opportunity to experience North America and Major League Rugby.

Adams' arrival has given the Arrows a second playmaker, allowing fellow New Zealander Sam Malcolm to move from No. 10 to fullback. Malcolm was the only Arrow he knew. When Adams went to Super Rugby with the Rebels, West Harbour signed Malcolm as his replacement.

Silverthorn believes Adams is "different than any other (No.) 10 on the MLR. He just has that X factor."

"He's unreadable, to be honest," he added. "He's looking one way and passing the ball 20 yards the other. He just has that kind of confidence ... He's willing to try stuff."

A native of Auckland, Adams played for Southland in the Mitre 10 Cup after school. A former scrum half, he honed his halfback skills training with former All Black Jimmy Cowan and his brother Scott Cowan at Southland.

"I'm definitely more suited to being a fly half than a halfback ... I like to play with a bit of flair and a little bit flashy," he said. "I just like to have as much fun as I can."

A risk-taker, it's perhaps no surprise that Adams liked watching Carlos Spencer growing up. "He and (fellow All Black) Dan Carter would be my two biggest idols as (No.) 10s, as professional rugby players.

"I've probably got a mix of both of them where I can. I like to have a little bit of flashiness like Carlos but when it needs to be, I suppose I can rein it in and be nice and conservative or accurate like DC."

Early into his MLR career, Adams says he has been "quite surprised" by the level of play here.

The Arrows finished fifth with an 11-5-0 record in their inaugural MLR season in 2019 before falling to the eventual champion Seattle Seawolves in the playoff semifinal. Houston finished seventh at 6-10-0.

Toronto's Spencer Jones, Leandro Leivas, Gaston Mieres and Marcello Wainwright are all injured. Leivas and Mieres are listed as day-to-day while Jones and Wainwright are week-to-week, according to the Arrows.

Adams, who left New Zealand on Dec. 27 for Canada, says he is enjoying the many things Toronto has to offer but is still dealing with the Canadian winter.

"I don't know if I'm getting used to it or just accepting it for what it is now," he said with a chuckle.

Because of the weather in Toronto, the Arrows play their first seven games on the road. The home opener, against the Utah Warriors, is April 4.