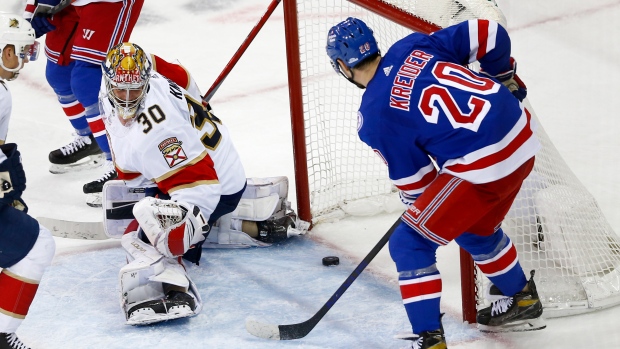 Artemi Panarin had a goal and two assists, Mika Zibanejad had a goal and an assist, and Alexis Lafrenière also scored for the Rangers. Igor Shesterkin stopped 34 shots to help give coach Gerard Gallant his 300th career victory. New York heads into the All-Star break with four wins in its last six overall, and seven of eight at home.

“Playing that team is a really good test for us,” Zibanejad said. “I thought we had a really good game. We battled hard and for the most part played the right way. We go to the break with two big points and that's huge for us."

Anthony Duclair and Sam Reinhart scored for Florida, and Aleksander Barkov had two assists. Spencer Knight had 30 saves for the Panthers, who have 69 points and are assured of having the best record in Eastern Conference at the break.

Florida, playing for the ninth time in 15 days, had its four-game win streak snapped after going 12-2-1 in January.

“For the most part, we’ve played really well," P.anthers coach Andrew Brunette said. "We’ve played a lot of hockey. We might be on fumes a little bit. It’s been a long month. It will be good to get a break.”

Zibanejad threaded a pass through traffic in front of the net to Kreider on the right edge of the crease and he tapped it in to give the Rangers a 4-2 lead with 5:21 remaining. It was his 33rd goal of the season and 17th on the power play — NHL bests.

“The pucks go in for him this year,” Zibanejad said of his All-Star linemate. "He still does everything that he's been doing for the last five, six years. I'm just happy to see him get rewarded and he's coming up with big goals for our team.

The Panthers pulled Knight for an extra skater with 3 1/2 minutes remaining. He was back out for a faceoff in the defensive zone two minutes later after Barkov was called for a tripping penalty, and was pulled again with 55 seconds left. Panarin then sealed it with an empty-netter.

“I thought we were in the game the whole time,” Florida defenseman MacKenzie Weegar said. "They played strong at home tonight. They got away with the two points tonight. Good for them.”

With Florida on a power play early in the second period, Barkov brought the puck up the middle and fired a shot that went off the goalpost. However, Reinhart knocked in the rebound from the right side at 2:18 to give the Panthers a 2-1 lead. It was his 16th of the season.

Lafrenière tied it just 1:09 later as he came around the back of the Panthers' net and got a pass from Kreider and put it past Knight for his 10th.

With the Rangers on their third power play of the night, Ryan Strome found Kreider all alone in front and he beat a diving Knight from the left side with 2:35 left in the second to put the Rangers up 3-2.

“The last two periods were great,” Gallant said. “We battled back from a tough first period, but our team was as good as they were, and they owned the puck pretty much. I was happy obviously with the way our team responded.”

The Rangers got on the scoreboard 35 seconds into the game when Zibanejad's cross-ice centering pass for Ryan Reaves was deflected by Panthers defenseman Gustav Forsling past Knight. It was Zibanejad's 18th.

Owen Tippett appeared to tie it at 9:20 as he beat Shesterkin on the glove side with a shot from the left circle on an odd-man rush. However, the Rangers challenged for offside on the play and the goal was disallowed after a review.

Less than 90 seconds later, Duclair tied it 1-1 as he fired a shot past Shesterkin's blocker side from the right circle. It was his 19th. Jonathan Huberdeau and Barkov had assists on the play, extending point streaks to four games for both.

Panthers: At Carolina on Feb. 16 to open a three-game trip.