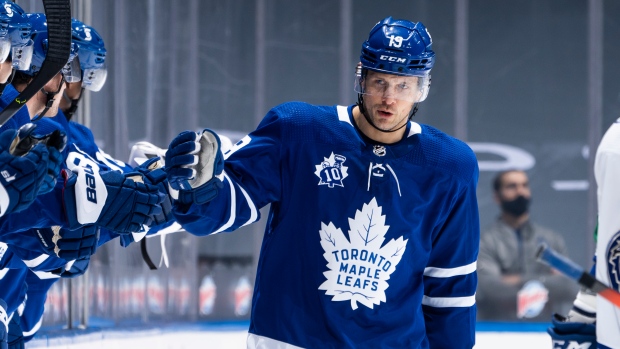 TORONTO — Jason Spezza still believes in two things: That he can help a team compete for the Stanley Cup, and that the Maple Leafs are capable of getting there.

That’s why Spezza has signed on for a third straight season in Toronto, on a third consecutive one-year, league-minimum deal (this one being worth $750,000). The contract materialized just two weeks after the Leafs’ most recent playoff embarrassment, where they blew a 3-1 first-round series lead over Montreal last month and lost to the Canadiens in Game 7.

It was another sad chapter in Toronto’s playoff history, joining other opening-round exits in 2017, 2018 and 2019, and their failure to qualify for the NHL’s postseason tournament in 2020. Spezza knows how bad that track record looks, but it doesn’t diminish what he sees remaining of Toronto’s promise.

“I know anything you're going to say at this time of the year doesn't really matter because we lost and I'm still pretty angry about it and frustrated,” Spezza told reporters on Wednesday. “But I feel like the group has potential. We feel like we have work to do to get better but we're pretty close to having a chance to have a run. Until we do it, no one's going to believe us but internally we believe that.”

Spezza knows better than anyone how few opportunities remain for him to pursue a Cup. The 2021-22 campaign will be his 20th pro season, and the veteran just turned 38 last week. But despite being the Leafs’ second-oldest player last season, Spezza only got better down the stretch and into playoffs.

In that series against the Canadiens, Spezza scored the second-most goals (3) and fourth-most points (5) for Toronto in a fourth-line role that averaged the second-fewest minutes per game (11:44) among players who appeared in all seven tilts.

Spezza made the most of every postseason shift, outshining Leafs’ superstars Auston Matthews (one goal in seven games) and Mitch Marner (zero goals in the series) along the way. It wouldn’t be enough to salvage Toronto’s once-promising season though, a fact that continues to both sting and motivate Spezza.

“It's definitely a frustrating time; I still feel frustrated by the result,” he said. “But the only way to get there is to continue to come back and work harder and do more to put ourselves in an even better position to succeed next time we get to the playoffs. The group we have is extremely dedicated; we have young guys in their prime that are going to continue to push and get better and hopefully learn from these experiences. There's room for optimism there.”

Both general manager Kyle Dubas and coach Sheldon Keefe made it clear to Spezza at his season-ending meeting that they wanted him back. And there wasn’t much negotiation needed, as Spezza happily accepted another minimum contract from the only team he wanted to be on.

“I'll be honest: All I care about is playing on a good team and just trying to win. If I could take less [money], I would,” said Spezza, who has earned about $89 million in his career to date, per Cap Friendly. “I love playing the game, I love competing. Chasing the Cup is at the forefront of my mind daily, and anything I can do to help the team acquire better players, that's why I just take league minimum.”

Spezza was also pleased with how the season played out for him personally. His 10 goals and 30 points in 54 regular season games was the most he’s tallied since 2016-17, and toggling between the centre and wing positions while anchoring Toronto’s fourth line proved easier than he thought.

“I felt comfortable in my role,” Spezza said. “I was able to help the team with that matchup nightly; that was important for me. And just the comfort level of playing the wing this year was probably better than it's ever been. Every night, your role varies a tiny bit, and for me it's just trying to be consistent. I thought I had good consistency in my approach this year, and then just trying to stay healthy [was key].”

Once Spezza knew he wanted to give Toronto another chance, he just had to clear a return with some very important people: his wife and four daughters.

Last season, player’s families were under strict COVID-19 restrictions as well. Those didn’t allow for Spezza’s children to socialize or participate in what few activities were available to them. There’s enough hope that this coming year won’t require quite so much sacrifice though, which allowed the Spezza clan to hop on board with dad for another go-around.

Spezza said he’s been back in the gym daily preparing for next season, and will start skating again soon as well. When Toronto’s campaign starts up, Spezza will be just 30 points shy of 1,000 in his career as well, a carrot that could prove enticing to chase. Only that’s not what Spezza is coming back for.

That’s not even close.

“The feeling you have as a player when you're winning games, it's unmatched,” he said. “The joy of coming to the rink, it's a fun atmosphere to be around. I got lots of points, I'm not too worried about that. I'm just going to try to win hockey games so we can have fun coming to the rink. I find I'm a better version of myself when we're winning games and happy so I'm going to keep trying to just strive for that.”​