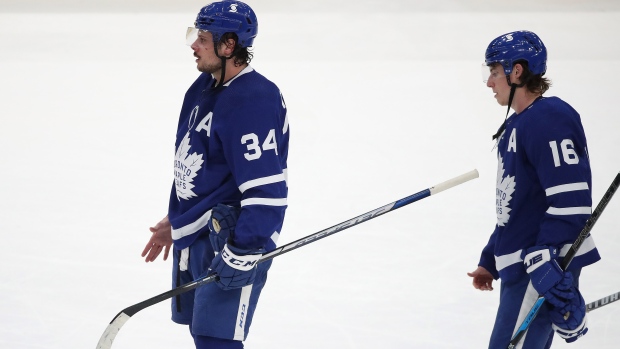 TORONTO — The Maple Leafs have run out of excuses for their postseason shortcomings.

Perhaps it’s because losing has become all too familiar. When Toronto fell to Montreal in Game 7 of its first-round playoff series on Monday, it was the fourth time in five years that the Leafs had been jettisoned from the opening round, and third time it happened in a decisive Game 7.

The Leafs were coming off an impressive regular season where they won the North Division, and were facing a Montreal team they finished 18 points ahead of in the standings. Toronto had a 3-1 series lead over the Canadiens too, and then blew it in stunning fashion.

“The end result is terrible, it's not what we wanted,” said Mitch Marner on Wednesday during the Leafs' locker clean-out. “This year we had the talent, we had the will, we had the fight. It just didn't come through, and it’s always the same words at the end of the year. We had three cracks at it, and we’re all very disappointed because we had such high confidence that we were a team that was meant to do a lot more.”

No one has taken more heat in the wake of Toronto’s latest loss than Marner and Auston Matthews. Playing together on the Leafs’ top line, the duo produced only one goal and nine points through seven games, and they were a non-factor offensively in Toronto’s final three losses with a paltry three assists combined.

It was baffling to see the two rendered so ineffective, given how strong their regular-season performances were.

Matthews scored 41 goals in 52 games this year to earn the NHL’s Rocket Richard Trophy and was fifth overall in league scoring with 66 points. On Wednesday, Matthews was also announced as a finalist with Connor McDavid and Sidney Crosby for the Ted Lindsay Award, handed out to the NHL’s most outstanding player as voted on by fellow members of the National Hockey League Players’ Association.

That was of little solace to Matthews though, given how badly the playoffs unravelled.

“Individual awards are great, but I don’t think there’s quite the satisfaction compared to winning with the team,” he said. “I hold myself to a high standard. To not produce the way I wanted to is obviously frustrating. If you had told me our line [with Marner and Zach Hyman] would have had X-amount of chances and produced only a couple goals, I'd probably have begged to differ. But that’s not the way it went, and we were put out there to produce and we weren't able to get it done.”

Marner was step for step with Matthews in regular-season output, finishing fourth overall in NHL scoring with 20 goals and 67 points. But he’s also been a perennial under-performer in the postseason, going 18 consecutive playoff games without a goal.

The 24-year-old winger said he wouldn’t change anything about his preparation for the Montreal series though, claiming there were more positives there than he and Matthews have gotten credit for.

“I thought we had a lot of great looks,” Marner said. “I know everyone just looks at the numbers and stats, but I thought our line did a lot of great things and we had a lot of great chances to produce goals and they didn't go in the net and that sucks. But we competed and we didn't quit ever and never had any doubts in each other and that's something that you want in a line and as a team.”

Marner’s social media channels have been flooded over the past 48 hours with negative comments, something he's avoided seeing since deleting apps from his phone prior to the playoffs.

There’s also been conversation swirling about whether this recent postseason embarrassment indicates it’s time for Toronto to move on from its young core, primarily comprised of Matthews, Marner and William Nylander.

Together, those three take up nearly $30 million of Toronto’s salary cap.​ Given the cap will remain a flat $81.5 million going forward – and that John Tavares is also on the books at another $11 million – there are questions to answer about whether the Leafs can win with so much cash tied up in so few pieces.

General manager Kyle Dubas won't speak with the media on that topic until Wednesday afternoon, but Matthews made it clear any thought that Toronto would be better off without Marner is misguided.

Marner didn’t seem surprised by the latest round of rumours, understanding the freshness of Toronto’s loss puts all scenarios into play.

“Everyone just wants to get in panic mode and do stuff and always want to figure something out and try something new,” he said. “But I think [the front office] has a lot of confidence in our team, like all of us do in our locker room. We all know how much talent we have, how much grit and will we want to play with and we all want to win. And that's why it's so disappointing right now, because we didn't meet our own expectations.”

Something does have to change though for Toronto to end its cycle of early playoff failures. Whether they do that with or without the core intact remains to be seen.

“I think it's more probably the mental side,” Matthews said of the Leafs’ failings. “It’s realizing when you've got a team in that position to get the job done and close them out. That's what great teams do and we failed to execute in that department. There's really no excuses; you've got to make your own luck.”