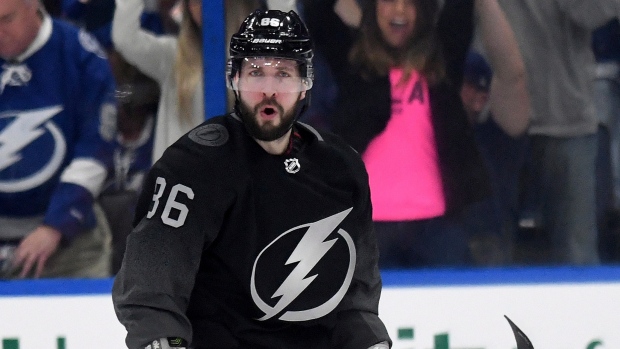 TAMPA, Fla. — It was another memorable night for Nikita Kucherov, Vinny Lecavalier and the Tampa Bay Lightning.

Kucherov scored twice while breaking Tampa Bay's single-season record for points, leading the Lightning to a 3-2 victory against the Detroit Red Wings on Saturday.

Thomas Vanek and Anthony Mantha scored for Detroit, which fell to 1-6-3 in the past 10 games. Jonathan Bernier finished with 30 saves.

"We didn't rise to the occasion tonight, not even close," Detroit coach Jeff Blashill said. "Too many guys weren't skating."

Kucherov, one of the front-runners for the NHL MVP award, has 110 points through 69 games. Lecavalier held the previous franchise record, finishing with 108 points when he had 52 goals and 56 assists during the 2006-07 season.

The record-setting point came on Kucherov's 32nd goal. He was alone at the top of the crease when he got a pass from Brayden Point and flipped the puck over Bernier at 11:56 of the first period.

"It's special for me and my family, definitely," Kucherov said. "I don't think many people believed in me and I'm just trying to keep proving them wrong. I'm happy for myself and thanks to all the guys for helping me out. Without them I wouldn't have this much success."

Said Lecavalier in a statement: "Kuch is an unbelievable player. He is so dominant and talented that it is no wonder he broke my Lightning record for most points in a season. I'd like to personally congratulate Nikita for the accomplishment."

But Tampa Bay feels as if there is plenty to accomplish in the final few weeks of the season.

"We've talked about this a lot, to have consistency in our game," coach Jon Cooper said. "I thought tonight ... we really didn't give them much. I really liked the way we played from start to finish."

McDonagh also scored in the first on a wrist shot from the centre point, helping Tampa Bay build a 2-0 lead.

The two-goal advantage held up until late in the second period when Vanek deflected a Niklas Kronwall pass past Domingue for a power-play goal with 3.1 seconds left.

Kucherov also scored on a one-timer from the right circle 13:53 into the third for his 33rd multipoint game of the season. Mantha got one back for Detroit with 56 seconds left, but Tampa Bay held on.

"It's really frustrating," Mantha said of the losing streak to the Lightning. "I mean it (stinks) that we can't win against these guys. I don't know what it is. I mean (Bernier) played an unbelievable game tonight. He probably saved four or five goals against and we couldn't build anything offensively."

NOTES: D Jan Rutta made his Lightning debut after he was called up on an emergency basis on Friday. ... The Lightning were without D Dan Girardi (lower body), LW Adam Erne (upper body) and D Anton Stralman (lower body), who are all listed as day to day. ... Detroit C Dylan Larkin missed his third consecutive game with a neck injury. ... Domingue made his first start on home ice since Dec. 10. ... Detroit's last regular-season victory against Tampa Bay came on Nov. 3, 2015. ... Mantha has three goals and nine points in his past eight games. ... Bernier fell to 0-4-3 in his past seven decisions.