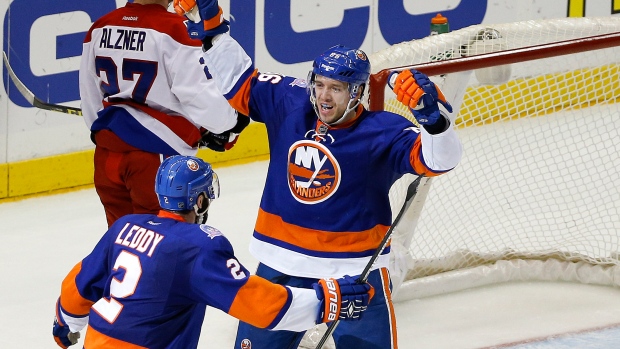 UNIONDALE, N.Y. - Islanders captain John Tavares was still attempting to gather his bearings after being levelled in the corner, when he heard the familiar — and welcome — roar go up inside the Nassau Veterans Memorial Coliseum for what could be the last time.

Sparked by Tavares' rush, Nikolay Kulemin scored the go-ahead goal with 9:27 left in a 3-1 victory over the Washington Capitals on Saturday that forced a seventh game in the first-round playoff series.

When did Tavares know the Isles had scored?

"Just when I saw everyone going crazy," Tavares said. "I'm just happy it went in."

Tavares had a goal and assist, Nick Leddy had two assists, and Cal Clutterbuck scored into an empty net with 53 seconds left.

Now the two Metropolitan Division rivals who finished the season with 101 points each will meet Monday night in Washington to decide who advances to face the Presidents' Trophy-winning New York Rangers.

Tavares and the Isles were excited to reward their home fans with a win.

The next objective is to advance to the second round and deliver at least two more home games before the Islanders make the 28-mile-move west to the Barclays Center in Brooklyn next season.

"We want to keep this thing going. We want to be able to play in front of them even more," defenceman Brian Strait said. "To not keep it going, it doesn't matter. It's a failure."

John Carlson scored for the Capitals, who had won the previous two games, including a 5-1 win on Thursday.

"To me, at the end of the day, their desperation level was higher than ours," Capitals coach Barry Trotz said. "Now we're both desperate."

Kulemin's goal capped a frantic series of plays, which began with a shoving match between numerous players in front of the benches.

Seeing the confusion at the benches, Tavares gathered the puck in his own zone and took off up the middle. Attempting to split two defenders, Tavares failed to get a shot off before being bowled over in the left corner by Alex Ovechkin and Karl Alzner.

No one seemed to notice that the puck squirted to Leddy at the left boards. He then fed Kulemin, who was all alone in front. Kulemin went across the top of the crease and wrapped the puck inside the left post.

Kulemin got to the front of the net after bullying his way through the crowd at the benches.

"People were grabbing each other," Kulemin said. "There was a lot of stuff going on that shift, and I just saw the open space in front of the net and went there."

Trotz placed part of the blame on Ovechkin for following Tavares into the corner.

"If we would've made the right read, we probably wouldn't have been in that situation, a one-on-one with the goalie," Trotz said.

Capitals goalie Braden Holtby was surprised by how open Kulemin was.

"I've never seen a play like that, playing 2-on-2-hockey," Holtby said. "You have to keep your composure a little better, not double-coverage. You don't plan for that stuff. It's tough to swallow."

The Capitals were a goal post away from tying it 4 minutes later.

Jaroslav Halak stopped Troy Brouwer's initial shot from the left circle, and the rebound dribbled into the slot. Jay Beagle got to it and lifted a shot over Halak but bounced it off the crossbar. The puck landed in the crease, where Islanders defenceman Johnny Boychuk shovelled it under Halak to stop the play.

Tavares opened the scoring seven minutes in. The Capitals responded with Carlson's power-play goal with 5 seconds left in the first, and with Tavares off for slashing.

The Islanders overcame a lineup that was further depleted by injuries, and two defencemen making their playoff debuts.

Matt Donovan stepped in for Griffin Reinhart, who struggled on Thursday. And Scott Mayfield, who spent all this season in the minors, replaced Calvin de Haan, who was hurt during the third period of Game 5.

The Islanders are leaving Nassau County after 43 seasons.

NHL Commissioner Gary Bettman on Friday said the move was long overdue because the arena was outdated, and placed the blame on local politicians for failing to approve several proposed plans for a new arena.

One fan carried a sign that read: "This Is Home, Not Brooklyn."

After the second period, fans inside the arena booed a commercial pitching season tickets for next season.

Ovechkin made a joke to CSN Washington-TV that he might consider taking a chair home as a souvenir.

NOTES: The Islanders and the NHL stepped up security inside and outside the arena, including having officers patrolling the surrounding parking lots on horseback. ... The Isles also sat C Anders Lee, who was replaced by Colin McDonald. ... The Islanders failed on their one power-play chance, and dropped to 0 of 13 against Washington. The Capitals are 2 for 13.