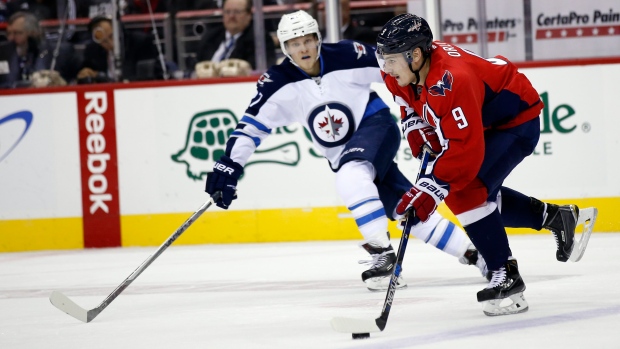 WASHINGTON - Evgeny Kuznetsov had a goal and two assists and Dmitry Orlov broke a tie late in the second period to lift the Washington Capitals over the Winnipeg Jets 5-3 Wednesday night for their third straight win.

The victory comes two days after the Capitals grinded out a 1-0 victory over Edmonton. This game was a more free-wheeling one. That's where Washington has been comfortable over the years, but Trotz likes that his team can adjust to different tempos.

"I think we're adding and building our game, foundation-wise," coach Barry Trotz said. "We can play a 1-0 game. We can play a wide-open game. We have shown the ability that if we don't score first, we can come back."

Orlov's third-period goal was the difference against the Oilers. In this game, his slap shot with 3:38 left in the second period beat goalie Michael Hutchinson and snapped a 3-3 tie.

Kuznetsov earned the lead assist on that play and added an insurance goal in the third period. This was his fifth three-point game this season — and his second in the last three games.

He now has nine points in his last seven games. Kuznetsov has posted 24 points on eight goals and 16 assists in Washington's first 21 games this season.

Washington has won eight of its last nine games versus Winnipeg.

Orlov now has scored goals in three straight games after going without one in his first 18 contests. Both of his tiebreaking goals in the last two games came on left-handed slap shots.

He's giving an already potent offence some extra punch thanks to a career-best four-game points streak.

John Carlson added two assists for the Capitals in his third multi-assist game this season.

The Capitals created a number of scoring chances in the first period and held a 15-6 edge in shots but the game was tied at 2 after one period.

Williams scored just 1:12 into the game for a 1-0 Washington lead. Myers and Ladd answered with consecutive Winnipeg goals before Ovechkin tied it on a power play with 1:14 left.

Backstrom and Mathieu then traded second-period goals. Perreault, a former Capital, tied the game for Winnipeg at 3-3 on the power play thanks to Blake Wheeler's screen of goalie Braden Holtby (23 saves).

The Jets have had to drive for more offence to overcome their defensive struggles, and coach Paul Maurice says that's adversely affecting his club.

"We're pushing for offence," Maurice said. "We're not a particularly good defensive team, and we've been chasing a lot of games. For too many minutes of the game, chasing that game and when you're doing that you're looking for offence that's hard to generate."

NOTES: Williams now has four goals in his last seven games after scoring just two in the first 14. ... Washington LW Andre Burakovsky returned to the lineup after coach Barry Trotz scratched him the past two games. Burakovsky had two goals and four assists in his first 18 games. ... Myers' goal was the 50th of his NHL career. ... This was the only time that Winnipeg will play in Washington this season.