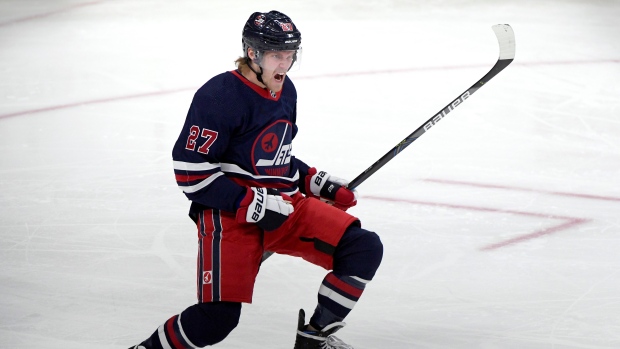 Laine was one of four Winnipeg Jets with a goal and one assist, and Kyle Connor notched a goal and pair of assists, in a 5-1 victory Tuesday that handed the Stars their fourth straight loss.

“I wish we played 82 against those guys because I’d have a lot of goals,” said Laine, who's scored 18 goals in 16 career games against Dallas. “It just seems like it goes in. Don’t have any explanation.

Nikolaj Ehlers, Josh Morrissey and Mark Scheifele also had a goal and helper each for Winnipeg, which is 4-1-0 in its past five games.

Defenceman Miro Heiskanen scored for the Stars, who are now 0-3-1 since their seven-game win streak ended.

Anton Khudobin stopped 25 shots for Dallas (15-11-3), who are now two points back of the Jets in the Central Division standings.

"That was our worst game of the year," Stars coach Jim Montgomery said. "And we never responded throughout the game and I apologized to Dobie (Khudobin) after the second (period) for the effort in front of him."

Winnipeg led 1-0 after the first period and 4-1 after two.

It looked like Laine got the Jets a goal 13 seconds into the game, but Dallas successfully challenged for offside and it was wiped away.

Ehlers made it 1-0 at 7:45 when he got the puck in the slot, spun around and beat Khudobin.

“Everything,” Ehlers replied when asked what he liked about his team's performance. “We came out hard, got the first goal after 13 seconds, but we kept going after (it was disallowed).

“I don't think we gave them many chances and that's the way we've got to play.”

Winnipeg had an 8-3 advantage in shots on goal after the first period. The three shots allowed was a season-low for the Jets.

Khudobin started the second period by making a pair of pad saves on breakaways by Scheifele and Ehlers, but then the bounces went against him.

Connor notched his 11th goal of the season off a deflection at 7:56. Morrissey got his goal courtesy of Stars forward Mattias Janmark, who had the rebound go off his skate and into the net to make it 3-0 at 11:12.

Heiskanen broke his team's goose egg at 17:59 when he went in alone on Hellebuyck, but Laine scored his eighth of the season just a minute and a half later to restore the Jets' three-goal lead.

"They (the Jets) were better in everything tonight,” Heiskanen said. “I don't know. It was a bad game. (Khudobin) was great today, but everyone else was bad."

The shots on goal after the second were 21-14 for Winnipeg, which was another season-low allowed through two periods.

“We’re a better defensive team right now than we are an offensive team,” Jets coach Paul Maurice said. “The numbers say that for us this year.

“We thought and we still feel that there is quite a bit more offence – if the power play heats up a little bit and some chemistry is starting to come into the lines a little bit.”

Scheifele made it 5-1 with a wrap-around goal at 13:59 of the third. Laine picked up an assist, giving him the team lead in points with 27. Scheifele has 26.

Winnipeg heads out for a one-game road trip to Dallas. The Thursday rematch marks the first of a four-game homestand for the Stars.

Notes – Winnipeg Blue Bombers Nic Demski, Andrew Harris and Chris Streveler did the game's ceremonial puck drop, part of honouring the CFL team for winning last month's Grey Cup... The Jets announced earlier in the day that veteran defenceman Dmitry Kulikov will be out until late January with an upper-body injury.