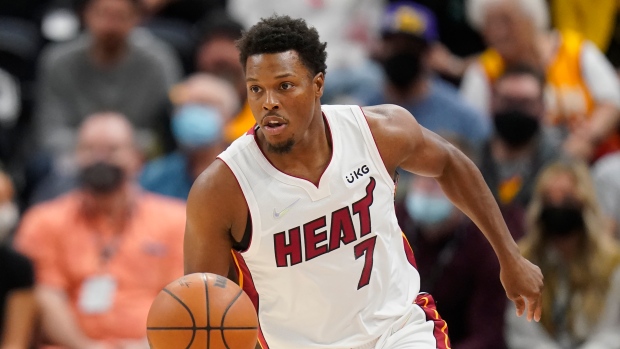 Toronto Raptors legend and current Miami Heat guard Kyle Lowry reflected on his time in Toronto and reiterated his plan to retire with his former club in an exclusive interview with Marc Spears of The Undefeated.

Exclusive interview with new #Heat guard Kyle Lowry in @TheUndefeated in which he explains why he left the Raptors, why he chose Miami, why he isn’t looking forward to returning to play in Toronto, his Heat-related big Thanksgiving plans and much more. https://t.co/cgNsUuNh9k

Lowry signed a three-year, $85-million contract extension this off-season after the Raptors completed a sign-and-trade transaction with Miami. He played nine seasons for Toronto, making six All-Star appearances and ultimately helping them win a championship in 2019. He is beloved in Toronto as a franchise icon, being proclaimed “Mr. Raptor” and the G.R.O.A.T (“Greatest Raptor Of All Time) by many fans of the team.

Despite his exit from the team, the Philadelphia native reiterated that he plans to retire with the club that he has famously proclaimed to be his second home.

“Like I’ve said, and I’ll say it now, I will sign a one-day contract and I’ll retire as a Toronto Raptor. That is my everything," Lowry said. “Toronto was home. That was legit home. You’re spending September to June there because your kids are at school in Toronto, and to not be able to go there, it was like, ‘Damn, when will I ever go back to actually enjoy the city?’ I went back there last offseason. I had dinner and it was good just having that chance to go and sit down there. And this season, I think we’ve got three days there. I’m not looking forward to [the emotion].”

Despite departing from the team that he spent the majority of his career and captured a championship with, Lowry said that there is no bad blood between him and the Raptors’ management . He said that he still speaks to Masai Ujiri and GM Bobby Webster, and that ultimately it came down to finding more stability for his family and later part of his career. Lowry believes he left the Raptors in a good place as he says now the spotlight and development shifts towards the current core of leaders on the team.

“And I’ve left the franchise in a place where Pascal is an All-Star, right? He’s going to come back, have a great [season],” said Lowry.  “Freddy’s going to continue to get better. He’s going to emerge as an even better leader. They’re guys who are still young. OG, you see his emergence as the offensive player. They will get more of the attention now. I would take all the blame because I wanted to. I never wanted them to have to deal with that stuff, because I just felt I could take the world on my shoulders. And they can, too, but now it’s theirs. I left the franchise in a great place.”

Lowry, a veteran of 601 regular-season games played for the Raptors, has not played in Toronto since February 28, 2020 due to the coronavirus pandemic. He is set to return on February 3, 2022 as a member of the visiting team for the first time, in which he echoed his nervous sentiments for his eventual emotional return to Toronto.

“I’m a man’s man, but I know I’m going to be a little bit sensitive and crying that day. I don’t know. I might hold it in,” Lowry said. “I’ve talked to DeMar [DeRozan] about it. But it’s one of them days where I know it’s going to be a lot of love for me and me giving love back, it’s just going to be interesting how it goes down because I don’t know what to expect.”