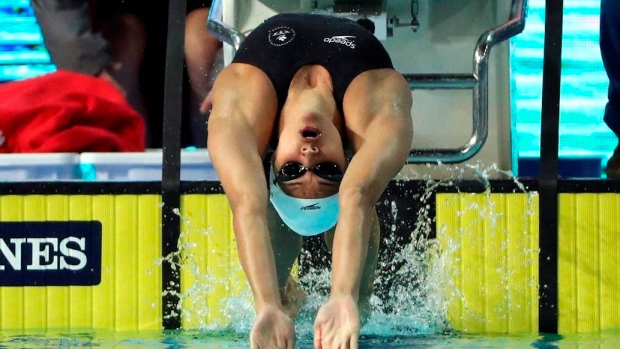 Olympic medallist Kylie Masse was looking for a way to keep her competitive drive fresh after finishing out her collegiate swimming career at the University of Toronto.

The International Swimming League, which opened its inaugural season in October, came together at the right time for her.

Masse's team, the San Francisco-based Cali Condors, are competing this week in the ISL final in Las Vegas. With Canada's Olympic swimming trials just three months away, Masse said the extra competition has been beneficial.

"I feel good. It's been awesome to have that smooth transition (from university swimming) and to be able to get races in in the fall," said Masse, the 100-metre backstroke bronze medallist from the 2016 Rio Games. "The meets have gone well and I hope to be faster (in Vegas).

"I think the environment will be exciting and hopefully I can feed off that. I'm excited to see what I can do."

The ISL featured eight teams in its inaugural season, four based in Europe and four in the U.S., with roughly 30 athletes from across the globe making up each roster.

Teams competed over six regular-season meets with the top two squads from the U.S. and Europe advancing to the finals on Dec. 20-21.

"It's been awesome," Masse said of her first season in the ISL. "I definitely didn't know what to expect heading into it all because it was all new ... But I've had a lot of fun and it's been really awesome to be with such a great group of athletes who have such a driven mindset.

"It really puts you in an inspiring and motivating environment, I think. Being able to compete with them as one team has been super exciting and I'm really happy that we made the final. I'm looking forward to seeing what we can do as a team."

Toronto teenager Penny Oleksiak, who won the 100 freestyle gold and 100 butterfly silver as a 16-year-old at the Rio Olympics, is also part of the league this season, swimming for the European-based Energy Standard team that also made the finals.

"It was really nice having a few Canadians on this team with me," Oleksaik said. "I'm never really lonely and it's fun because I get to see them all doing well and enjoying themselves. We're all kind of learning and having fun as we go along with it."

Racing during each ISL meet was spread over a two-hour session — there were no heats like in Olympic and world championship events — with four swimmers per final competing in the usual Olympic distances. Swimmers raced for team points and the top four finishers in each race were eligible for prize money.

Livestreaming of meets was available in the U.S. and Canada this season, but fans that attended in person were treated to an entertaining atmosphere featuring blaring music and neon lights flashing around the pools.

"I think it's very fun and exciting and it kinda catches peoples' attention that you don't only have to watch swimming during an Olympic year," Oleksiak said. "I think that's what they're going for — making swimming more common to watch than it normally would be.

"(The crowds) were honestly pretty big and pretty crazy. I wasn't expecting as many people to show up but ... it was insane."

"It's very different than what we normally do," the 19-year-old added. "It's very fast-paced, there's always a lot going on and it exhausts you in every way possible — emotionally, physically, mentally, everything — but it's really fun."

Masse said getting reps in the pool in a competitive atmosphere was one of her main attractions to the league.

"Racing is such a huge part of training," she said. "To be able to do that against your fastest competitors, it's something you normally get to do once a year or twice a year if that. So doing it a couple times in the span of four months, that's unheard of.

"It's great for the athletes themselves in terms of their own preparation, but it's also good for the whole sport. ... It really brings light to swimming."

With 14 Canadians spread over six of the eight ISL teams, Masse said she was impressed with the country's swimming potential heading into the 2020 Tokyo Olympics.

"It's an exciting year," the 23-year-old said. "(Canada) has such a great group of both men and women swimmers and I'm always honoured to be their teammate, so having some of them in the ISL and getting to compete against them has been fun.

"I think everyone's just excited for this coming year and digging deep to see what they can do."

This report by The Canadian Press was first published Dec. 19, 2019.