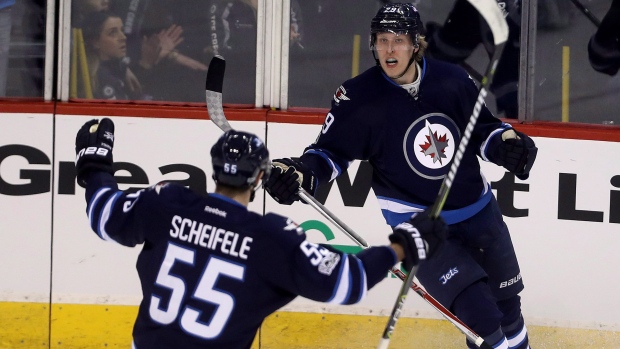 WINNIPEG — Patrik Laine likes to score in bunches, especially against the Dallas Stars.

Laine had the third hat trick of his rookie season, and second against Dallas, as the Winnipeg Jets snapped a four-game losing streak with a 5-2 win over the Stars on Tuesday night at MTS Centre.

"It's always nice to score," said Laine, whose 26 goals puts him one short of the rookie goal lead. "It was a huge game for me and my linemates and the whole team. These four last games haven't been that good so it was just nice to have a game like this."

Laine scored for the first time in six games, moving to within one of Toronto rookie Auston Matthews's 27 goals, and within one point of Matthews's teammate Mitch Marner who leads all rookies in scoring with 48 points.

"I would say that release is extraordinary. He gets the puck on and off his stick so fast that you can't find it," said Jets head coach Paul Maurice of Laine's winner. "That's the difference, right in that pure talent. You go back two years ago and how hard we had to grind to crash one in. How do I say this the right way? When you're assessing Patty Laine and where he's at — if he didn't score the three goals, I could've still come out and said that was his best game of the season. All the other pieces to his game were NHL right on."

Joel Armia and Blake Wheeler also scored for Winnipeg (26-29-4). Mark Scheifele added three assists to up his team-leading point total to 56, which is good for seventh in the NHL.

The Stars (22-26-10) erased a two-goal deficit with second-period goals from Jamie Benn and Tyler Seguin.

Connor Hellebuyck made 34 saves in his third straight start for the Jets since Ondrej Pavelec suffered a lower-body injury on Feb. 7, improving his record to 18-15-1 on the season.

Stars netminder Antti Niemi stopped 18 of the 21 shots he faced, dropping his personal mark to 10-9-4.

The victory also snaps a five-game home losing streak for the Jets, while Dallas suffers their sixth loss in their last seven games.

"I've never gone through a stretch where when you have opportunities and you have it on the right guy's stick, that the puck hasn't gone in the net," said Stars head coach Lindy Ruff. "(Patrick) Sharp hit two crossbars, a deflection hit the post and doesn't go in. (John) Klingberg (had) Seguin point blank in the slot. If you want to look at key opportunities, we missed."

Tied 2-2 in the third, Dallas and Winnipeg exchanged grade-A opportunities late as the Stars rang three shots off the post behind Hellebuyck, while Winnipeg's Nic Petan fired a one-timer wide of a gaping cage on the power play before Mathieu Perreault grazed the post with a wrist shot.

"It's two teams fighting for their (playoff) lives. These guys were a playoff team last year and have a really talented squad over there," said Jets captain Blake Wheeler, who had his 17th goal of the season with the first of two Jets empty-netters. "You could feel they were pushing for the same thing we were pushing for. It made it a playoff feel game, a 2-2 game going into the third with those implications, there was a lot of intensity, a lot of chances. It's fun hockey."

Laine's winner came with 5:07 left in the game before he then completed his hat trick just over four minutes later with Winnipeg's second empty-netter.

The Jets head east for four games on the road, beginning with the Pittsburgh Penguins on Thursday before Canadian stops in Montreal, Ottawa, and Toronto. The Stars wrap their four-game road trip through the Central Division on Thursday in Minnesota against the Western Conference leading Wild.