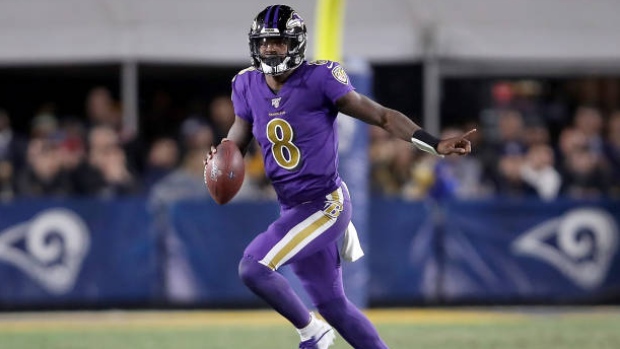 LOS ANGELES — Lamar Jackson basically hadn’t allowed the football to touch the ground Monday night until he dropped an ordinary shotgun snap late in the first half at the Coliseum. He picked it up, split the pocket and sprinted away through the Rams’ defence, going 35 thrilling yards before tripping right at the goal line.

Instead of celebrating, Jackson sprung up and remonstratively slapped both his hands on his helmet.

Baltimore’s brilliant young quarterback wants to be perfect. He got awfully close in his “Monday Night Football” debut with the fearsome Ravens.

Jackson matched his career high with five touchdown passes and ran for 95 yards in another splendid all-around performance, and Baltimore routed Los Angeles 45-6 for its seventh consecutive victory.

Mark Ingram rushed for 111 yards and a TD and caught a scoring pass while the streaking Ravens (9-2) became the fourth team in the 21st century to score touchdowns on its first six drives in a game. With Jackson operating almost flawlessly at the controls, Baltimore embarrassed Aaron Donald and the previously solid Rams defence by racking up 480 yards with its evolving brand of high-octane football.

“We’re clicking on all cylinders right now,” Jackson said. “It’s OK, but we’re trying to win the Super Bowl. This is cool, but we’re chasing that right now, and that’s what we’re focused on.”

The Ravens’ 22-year-old quarterback strengthened his Most Valuable Player case while going 15 of 20 for 169 yards and constantly making smart decisions with his arm and his feet. He hit Willie Snead with his fifth TD pass with 14:43 to play and took the rest of the night off, but even the LA crowd serenaded him with “M-V-P!” chants in the final minutes.

“That’s just operating at the highest level you can operate as a quarterback,” Ravens coach John Harbaugh said of Jackson’s first half, in which he went 9 for 9 and led four TD drives.

Snead and Marquise Brown had two TD catches apiece for the Ravens, whose winning streak is their longest since they won seven straight to close the 2000 season on the way to their first Super Bowl title. At 9-2, the Ravens have matched their best start since 2012, which ended in their second Super Bowl championship. Baltimore has outscored its last three opponents 135-26.

Jared Goff passed for 212 yards with two interceptions and Todd Gurley rushed for just 22 for the defending NFC champion Rams (6-5), who took the worst loss of their three seasons under coach Sean McVay.

“We didn’t do nearly enough to be competitive,” McVay said. “It was impressive. When you sit there and watch and see (Jackson) up close and personal — on third down with his operation to find completions and making plays with his legs — I can see why they are talking about him being MVP.”

Los Angeles hadn’t lost by more than 21 points in its first 43 games under McVay, whose once-prolific offence had another humiliating performance with just 111 yards in the first three quarters before finishing with 221. The Rams failed to score a touchdown for the second time in three games, and Goff didn’t throw a TD pass in November.

In the Coliseum’s first Monday night game since the Rams’ epic 54-51 win over Kansas City last November, the Rams gave up one more point than they had allowed in their previous four games combined. The Rams also were among the NFL’s best offensive teams for the previous two seasons, but they’ve lost that status this year while Baltimore has ascended to dominance.

“We got our faces peeled off,” said Rams safety Eric Weddle, who spent the past three seasons with Baltimore. “We didn’t do much good out there. ... (Jackson) is amazing. The tempo and the speed. I thought the first series or two, we would take our bearings to get adjusted to his speed. He’s one of a kind.”

The Ravens scored on their opening drive for the seventh time already this season when Jackson lofted an easy TD pass to Brown, who spent a year playing community college ball in nearby Santa Clarita. Brown got his second TD from 18 yards out on Baltimore’s second drive, and Ingram capped a 75-yard march with a 1-yard TD run on the third.

Baltimore got the ball back with only 1:55 left before halftime, but that was plenty for Jackson. He hit Snead with a 7-yard TD pass with 12 seconds left, and Rams fans booed their team off the field down 28-6.

Baltimore opened the second half with another 75-yard drive capped by Ingram’s TD catch. The Ravens held the ball for all but 59 seconds of the third quarter, and Snead made his second TD catch early in the fourth.

The Ravens finally had to punt in the fourth quarter, ending a streak of 18 consecutive drives without a punt.

Baltimore cornerback Marcus Peters made an interception in the fourth quarter to cap his first meeting with the Rams since they traded him to the Ravens last month. Peters shook hands with dozens of former teammates throughout the night, but he also engaged in some demonstrative trash talking with Robert Woods on the field, and he celebrated his pick with relish. Peters then exchanged postgame words on the field and up the tunnel with Rams cornerback Jalen Ramsey, who arrived two weeks after Peters’ departure.

Ravens: C Matt Skura was taken off the field on a cart in the first quarter with a knee injury. He didn’t return, and Harbaugh had no update on his condition.

Rams: Brandin Cooks had two catches for 32 yards in his return from a two-game absence with his second concussion of the season.