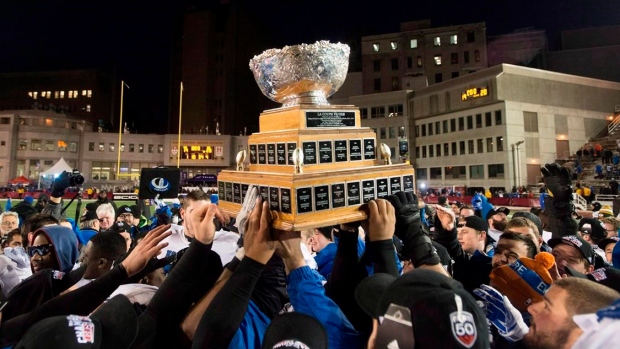 TORONTO — The governing body of Canadian university sports has awarded Laval University the hosting rights for the 2021 Vanier Cup.

The game is scheduled to be played Dec. 4 in Quebec City.

It's being pushed back a week later than normal in an attempt to accommodate a safe return of Canadian university football.

There was no U Sports football in 2020 due to the COVID-19 pandemic.

The Laval Rouge et Or are a perennial powerhouse in the U Sports football ranks. Laval has won a record 10 Vanier Cups in 12 appearances.

"We are excited that the first Vanier Cup coming out of the pandemic will be hosted by Universite Laval," Lisette Johnson-Stapley, U Sport's chief sport officer, said in a statement. "We had two options to consider: either play the Vanier Cup at the host of the Mitchell Bowl champion, or Laval and it was an easy decision, given the successful track record of Universite Laval organizing U Sports championships.

“Quebec City football fans have always risen to the call to support the team in the Vanier Cup regardless of the participants. We know that they will be there Dec. 4 to create an amazing environment for our student-athletes.”

"We are eager for Universite Laval to play a leading role in the revival of university sport and, above all, to be able to offer Quebec fans a large-scale event that they deserve after all that we have experienced in the last year,” said Julie Dionne, the director of Laval's sports activities department. "We are very happy that U Sports has placed their confidence in us once again and we will, as is our habit, do everything to make the Vanier Cup a success!”

The 2021 Mitchell Bowl (Atlantic/Ontario winners) and Uteck Bowl (Quebec/Canada West champions) games will both be held Nov. 27, with the winners advancing to the Vanier Cup.