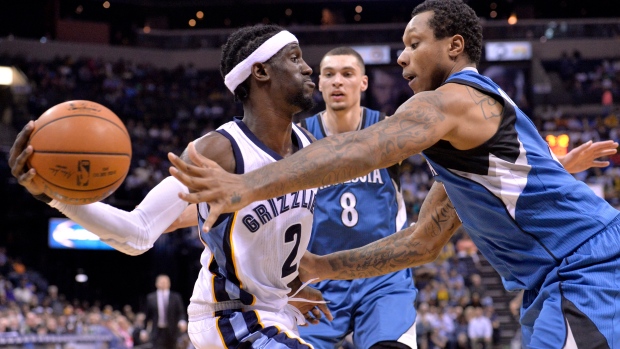 Zach Lavine scored 28 points and matched his career high with six 3-pointers, and Minnesota weathered a late rally by Memphis in a 114-108 victory over the short-handed Grizzlies on Wednesday night.

Memphis pulled within 108-104 with 1:12 remaining, but Karl-Anthony Towns, who had 18 points and 10 rebounds, scored four straight points to stop the rally.

"We started slow, and that hurt us in the end," Memphis forward JaMychal Green said. "We couldn't crack that four-point margin."

Anthony Wiggins had 16 points for the Timberwolves, while Gorgui Dieng and Ricky Rubio added 15 points each. Rubio had 11 assists.

"We started too slow," Memphis coach Dave Joerger said, "and spotted them too many points."

The Grizzlies were without the bulk of their starting lineup, including Marc Gasol, Mike Conley and Zach Randolph, all sidelined with injuries. The remnants joining Tony Allen, Barnes and Green were a handful of players signed to 10-day contracts, plus additions at the trade deadline.

Still, Memphis outscored Minnesota 70-40 in the paint while holding a 51-33 advantage on the boards, including 27 offensive rebounds, leading to 24 second-chance points.

"They were short-handed, but the players were playing and playing aggressively," Rubio said. "They were attacking the boards."

The Timberwolves were up 90-78 entering the fourth.

Memphis had one push left down the stretch, getting within four points on two occasions, the last coming on a rebound basket by Martin with 1:12 left.

"When you let a guy get caught on early like that, that's a cardinal sin," said Allen, who had 10 points and the primary task of guarding LaVine.

LaVine's early shooting made the difference.

"We couldn't have won the game without those shots," Minnesota interim coach Sam Mitchell said.

Grizzlies: Earlier in the day, Memphis signed Xavier Munford, a 6-foot-3 guard, to a 10-day contract. Munford, who did not play, became the fourth player signed to a 10-day contract by the Grizzlies since Friday. Munford was playing for the Bakersfield Jam in the D-League. ... Those 10-day signings don't include Hollins, who signed a pair of 10-day contracts, was released, then re-signed by the Grizzlies. ... Stephenson returned to action after missing the last game with a right wrist sprain. ... The Tennessee Sports Hall of Fame announced Wednesday that Gasol will be one of the individuals honoured as the Male Professional Athletes of the Year.

ZACH ATTACK: In his last four games, LaVine is 31 of 52 from the field, including 11 of 21 from 3-point range. "I've been shooting the ball well. Getting good shots. Taking good shots I know I can make," he said. "I'm just trying to keep it rolling."