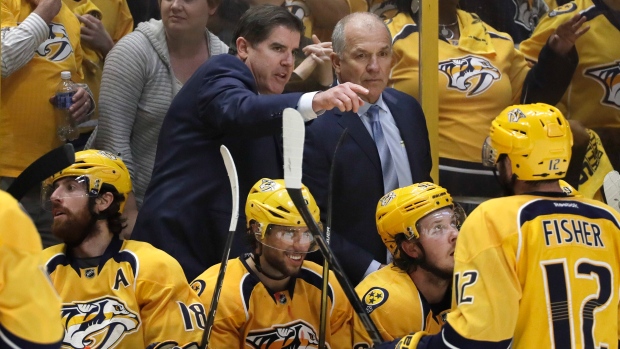 NASHVILLE — Peter Laviolette is not one to waste precious time reflecting on how he feels about taking his third different NHL team to the conference finals.

The coach is too busy trying to help the Nashville Predators bring the Stanley Cup championship to Music City.

"We're excited to get going and start," he said. "Guys have worked hard to get to this point and just want to keep working hard. Like I said, I think the most important thing is just keep our head down and keep doing the work."

It's tough to argue with Laviolette's approach considering his success.

Now 52, Laviolette is just the third coach since the NHL split its playoffs between conferences in 1994 to take three different teams this far, joining Ken Hitchcock (Dallas, Philadelphia and St. Louis) and Darryl Sutter (Chicago, Calgary and Los Angeles). If the Predators get past Anaheim in the Western Conference finals , which start Friday night, he would be the first in that span to take three different teams to the Stanley Cup Final.

Laviolette won the 2006 Stanley Cup with Carolina and led Philadelphia to the finals in 2010. Earlier this season, Laviolette became just the second U.S.-born coach to win 500 NHL games and the 28th overall to coach 1,000 games. His playoff record is 60-52, including 17-13 in three seasons in Nashville.

Paul Holmgren, now the Flyers' president, hired Laviolette to take over in Philadelphia in 2009 and watched the coach win the Eastern Conference title in his first season. Holmgren said Laviolette is so positive and such a strong motivator that the coach made him confident the Flyers would win every game. Laviolette's offensive drills also impressed him.

"Peter brings out offensive confidence to his players ..., and I think it's obvious in all the stops he's been," Holmgren said. "His teams, not only do they play well defensively, but they get in the offensive zone they have a concept, an idea of how to get the puck in the back of the net."

"We've walked pretty much hand-in-hand in terms of what we're doing to accommodate players to the way he wanted to coach," Poile said.

How Laviolette asks players to play isn't easy, demanding that they know the system so well that they don't have to think on the ice. This is the third season for defenceman Mattias Ekholm, and he said he knows exactly how to react in any given situation with a confidence that flows through the rest of the team.

"We know that we can have a really good chance of winning games," Ekholm said.

Forward Vernon Fiddler, 37, is back with the Predators after starting his NHL career in Nashville in 2002-03. He credits Laviolette with gauging just what the locker room needs.

"You can just tell he's been through this before," Fiddler said. "There's never any second-guessing. It's obvious this is the way it's going to be and that's how it is. There's no grey area. It's one way or no way. I think that's what's really driving our team."

Laviolette certainly has the ability to tap the right player at the right time. The first game he played Fiddler was in the second round against St. Louis, and Fiddler came through with the game-winning goal . Eight different Predators have scored game-winning goals this post-season.

What Laviolette hates is telling someone he can't play. But he does it because that's his job.

"Those are different things, but things that have to be done," Laviolette said.

It helps that Laviolette is a former player himself, though his NHL career as a defenceman lasted only 12 games with the New York Rangers during the 1988-89 season. A native of Franklin, Massachusetts, Laviolette played for the United States in the 1988 and 1994 Olympics with 594 career games in the minor leagues.

"He's an honest guy," Predators captain Mike Fisher said. "He'll tell it like it is. He's done a great job of communicating to us and what he wants and how we need to be successful. Yeah, he doesn't pull any punches, for sure, and that's a good thing. Guys know what you're getting. I think he's really brought the best out of a lot of people."