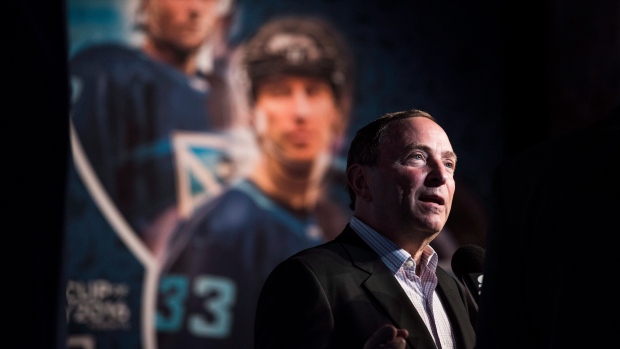 Another cache of NHL emails and documents that is being kept “in a shroud of secrecy” should be made public, say lawyers for a group of former NHL players suing the league over its handling of players who suffer brain injuries.

In court papers filed late Tuesday in U.S. federal court in Minneapolis and obtained by TSN, a lawyer for the former NHL players wrote that 27 documents that the NHL “intends to keep secret” should be released to the public.

The documents “tell a different side of the story than the false picture the NHL has sought to paint through its sophisticated public relations campaign – namely, that plaintiffs’ case is unsupported by the evidence," lawyer Michael Cashman wrote in a brief.

“The public and class members have an acute interest in concussions in sport and the long-term consequences of brain trauma resulting from repeated concussive and sub-concussive blows, " Cashman wrote.

Once-confidential emails and documents released over the past two years in the case have offered an unvarnished glimpse at the NHL’s collective attitude towards concussions and brain-injured players.

The league has argued that players should be able to “put two and two together” about the potential brain damage from repeated concussions. Players, the league says, could do their own research of newspapers and medical journals to find information about the subject.

But the former players charge the league continues to deny a link between concussions and the brain-withering disease chronic traumatic encephalopathy, or CTE.  The former players say unsealed NHL emails and documents lay bare the league's alleged ambivalent attitude towards head injuries.

Lawyers for the former players say they will be seeking to certify the case as a class action, meaning unless they opt out of the lawsuit, all of the NHL’s roughly 5,000 former players, as well as the surviving members of their families, would automatically become plaintiffs.

The former players face a Dec. 9 deadline to file a motion for class certification and wants 27 more documents made public to support their case.

“To date, the NHL has failed to provide concrete, particularized examples showing harm from disclosure of the information it wants to prevent public access to,” Cashman wrote. “The need for transparency is paramount.”

The NHL has given the plaintiffs at least 2.5 million pages of evidence in 300,000 documents. Most of those documents have been designated “protected,” meaning that they are redacted from the public record.

The first group of emails was made public in the case in October 2014 and included an email sent in November 2009 by NHL lawyer Julie Grand to Commissioner Gary Bettman. In that correspondence, Grand suggested that instead of investing in a study of retired NHL players, the NHL should “leave the dementia issues up to the NFL!”

In December 2015, lawyers for the former players and CTV’s W5 argued in the U.S. federal court in Minneapolis that the public had a right to review a group of 61 documents that were being completely hidden from public view.

In March, the court agreed to unseal 240 court exhibits, which ranged from internal NHL email correspondence to minutes of NHL board of governor meetings to confidential NHL concussion analysis.

Those exhibits included an email exchange in which NHL deputy commissioner Bill Daly linked fighting in hockey to concussions, depression, and “personal tragedies.”

In January at the NHL All-Star Game in Nashville, Bettman was asked about the court-ordered disclosure of emails.

"The selective released leaking of documents out of context may cause some people to scratch their heads, a couple of other people maybe to, for a brief moment, be a little embarrassed about salty language or the like,” he said. “But I'm very comfortable with our record.”

"I think in terms of us doing our business on an ongoing basis and the fact that we have the league to run, I'd prefer these things not be public. They'll be a distraction at best, but I don't think they impact the rest of the case."