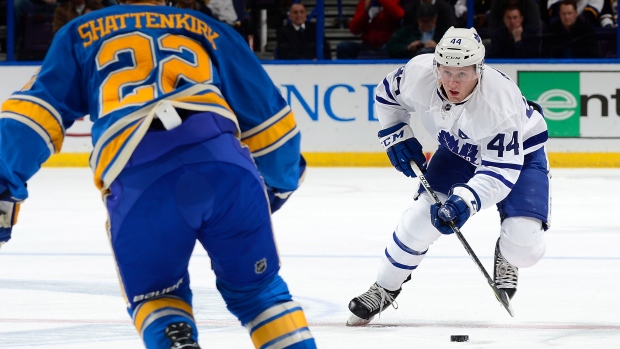 The Leafs practised at the Prudential Center in Newark on Sunday.

• After tweaking his right ankle on Saturday, Morgan Rielly sat out Sunday's practice. "He's fine," head coach Mike Babcock said. "The trainers decided to keep him off. We'll monitor that the best we can. He'll skate tomorrow morning and play tomorrow night." Rielly was spotted at the rink with a big ice pack wrapped around his foot. The defenceman sustained a high ankle sprain in a game on Jan. 17 and returned to the lineup on Thursday.

• Alexey Marchenko practised with the Leafs for the first time since being claimed off waivers from the Red Wings. He skated as the seventh defenceman and won't play on Monday against the Islanders. "We'll get him going and then we'll get him in when we get an opportunity to," Babcock said. "I like Marchy. He's a big man, good stick, good penalty killer, moves the puck alright so all in all he's a good person." Marchenko spent much of the workout close to Nikita Zaitsev. The pair were partnered at the recent world championship and then teammates again at the World Cup. Marchenko was asked what those experiences meant to his confidence. "It was really important," he said. "It was my first time with the national team. It was a great feeling to be in the dressing room, speaking Russian with my countrymen, it was a great atmosphere."

• Based on the pairings at practice it appears as if Matt Hunwick, a healthy scratch the last two games, may draw back in against the Islanders while Martin Marincin may be the odd man out. The Leafs have allowed 16 goals in the three games since the all-star break, but Babcock insists that things aren't quite as bad as they seem defensively. "I thought the game in Dallas we were red rotten that way. I didn't think we were as bad in St. Louis. I thought they came out and they jumped and they were better than us. And then last night I didn't think we were terrible. The puck went in the net too much, but I think you have times in the year when that happens. It was a big win for our hockey club. Every year you get into a little slide and you wonder if you're ever getting out of the slide and it's usually ugly when you do." Babcock ran a brief 25-minute practice on Sunday, which ended with a fun shootout competition.

• James van Riemsdyk played his 300th game with the Leafs on Saturday night scoring two goals, including the game winner late in the third period. The big left winger is on pace for 71 points, which would be 10 more than his previous high. "I feel like he's been more aggressive and less passive this season," said Nazem Kadri. "He's taking pucks to the net, physical on the forecheck on the body. I think that really energizes our team when we see a guy like that play that physical." What stands out to Babcock? "How hard he worked this summer," the coach said, "he took a huge step. And how much harder he's working every day in practice, how much more physical he plays in the games, how much stronger he is on the puck down low on the cycle. To me, the rush player is no more, he's a cycle player as well." The 27-year-old credits Babcock for helping him take the next step. "It's one thing to tell someone something, but it's another thing when you get shown how to go about doing that," JVR explained, "and with Babs, especially with playing defensively, that's been a big part of the growth of my game as far as being on the right side of the puck, doing little things without the puck that translate into playing better defensively. He's got things in mind that he wants everyone on the team to do to be a better defensive player and when you have that stuff it makes it a little more black and white versus just, 'Be better defensively,' because it's not always as easy as that."

• It's no secret who Babcock will be cheering for in the Super Bowl. He's long admired the job head coach Bill Belichick and quarterback Tom Brady have done in New England. "Tom Brady is the ultimate pro in my view of it," Babcock gushed. "When you look at favourite athletes he's by far mine not because of his skill-set, which is elite, but because of his drive train and his preparation. His receivers talk about it all the time how he makes them better. He works so hard, he's so prepared, he makes them better. By doing that you're making your coaches better, your team better and you're leading by example and, to me, that's what it's all about and that's why he's been good for so long and he keeps reinventing himself. To me, if you want to be the best in your business you got to have elite passion that leads to that grind that you're able to do it every day to get better and he's an example for all of us."

Kadri said a group of Leafs players planned on getting together at the team hotel to watch the game.