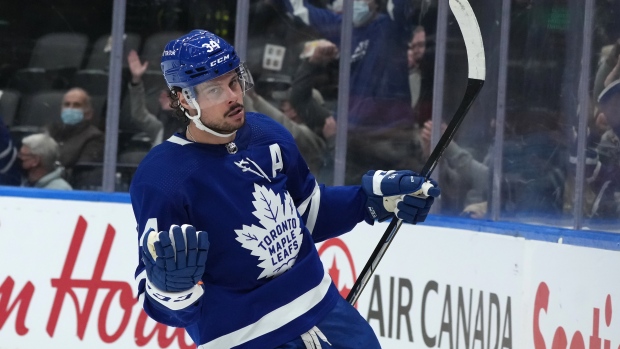 The Maple Leafs held an optional skate at Bridgestone Arena in Nashville on Saturday.

Does Sheldon Keefe expect Auston Matthews to be back in beast mode tonight?

"That's how he is most days so, yeah, I would expect it to be the case," the coach said.

The Leafs get their leading scorer back from suspension in Nashville. Matthews is anticipating some rust after missing a pair of games, but teammates know better than to doubt the 45-goal man.

"He's always aggressive, intense and effective for us so we're expecting more of the same," said defenceman Justin Holl.

"I'm sure he's excited to get back," said linemate Mitch Marner. "No one likes sitting out, especially for what he had to sit out for ... I'm sure it won't take him long to get back into game shape."

The Leafs produced two of their most impressive performances of the season with Matthews sidelined this week. A 4-0 win over the playoff-pushing Stars on Tuesday was followed up by a 3-2 win over the Stanley-Cup-contending Hurricanes on Thursday.

"We have to be proud of the efforts that we've put forth in the last couple games," said Keefe, "both in getting leads against good teams and then securing those leads and playing defensive hockey through the third periods of those games and also converting those defensive efforts into offensive opportunities. We have to enjoy that process and we have to enjoy the fact that we committed defensively, we committed physically and that's just got to be who we are down the stretch.

"You're in the final stretch of the regular season. You're preparing yourself for the playoffs and what's ahead. No matter who's in or out of the lineup that should be who we are and what we look like and what we prioritize. With Auston coming in today it does change the dynamic of our team, no doubt, but who we are and what we're about should be the same no matter what. I'm looking forward to seeing our guys get out and replicate the effort we had on home ice the last couple nights."

Erik Kallgren will make a third straight start on Saturday. The 25-year-old Swede has brought stability to Toronto's crease, but the players are also doing a better job locking things down in front of the net.

"We're working," Marner said after Thursday's win. "We're being competitive on pucks. We're not sitting back and playing just a defensive game. We're still up in people's face and getting on the forecheck quickly and playing quick with the puck."

---
Travis Dermott returns to the lineup after sitting out three straight games as a healthy scratch. The 25-year-old was hoping to compete for a top-four role this season, but instead has been pushed down the depth chart even though he is an option to play the left or right side.

"It's been hard, obviously," said Holl. "He's handled it really well. I know from experience, it's not fun being out of the lineup. He's a really good hockey player and he obviously wants to play every night."

Dermott has played fewer games (42) than both Timothy Liljegren (44) and Rasmus Sandin (50), who are in their first full NHL seasons.

"He's done a great job of just kind of staying the same guy through it," said Marner. "He's a great guy to have around with his attitude."

Dermott is averaging 14 minutes and 46 seconds of ice time per game, which ranks eighth among Toronto's defencemen.

"This most recent stretch that he's had, while Sandin was out [due to illness] for a while there and he was playing regularly, that's as good as he's played all season," said Keefe. "We made a decision to get Sandy back involved and wanted to give Sandin and Liljegren a good run there."

Dermott replaced Liljegren on the third pair during Friday's practice.

"We've had basically seven defencemen all season and we've tried to remain committed to keeping guys involved and not have people sit for too long," Keefe said. "Dermott has been in that mix all season and that is part of why he goes back in today. We think he's done a good job and he's a capable player for us."

Despite being requested by the media the last two days, Dermott has not been made available for an interview. With the deadline looming, there has been speculation that the Newmarket, Ont. native may be moved. Dermott is No. 40 on TSN's latest trade bait board. Liljegren, the only other Leaf on the list, is No. 48.

---
Saturday will be Toronto's final game before the deadline, but the coach doesn't feel like it's been a distraction.

"Every team is different," said Keefe. "There's probably a number of teams in the league that know they're losing guys and unloading guys. That's a different situation. Where our team is at, I think it's overstated. I don't see any sort of tension or anxiety or even discussion about it. I don't think it's a factor at all."

General manager Kyle Dubas has remained in Toronto this weekend. What message would it send if he made a move to bolster the group?

Assistant general manager Laurence Gilman is the only member of Toronto's management team on this trip.

---
Holl has been wearing a bubble since taking a stick to the face in Sunday's Heritage Classic.

"It might be a broken nose," he said. "I got hit on the tip, but then the bridge swelled up heavily so that's why I thought it might be broken, but I don't know. Either way, it doesn't really matter because I'll play regardless with an injury like that."

Holl is scheduled to see a specialist in the next few days to get a better sense of the injury.

"It's not too bad," Holl said. "I don't really notice it when I'm out there. I was telling some of the guys today, the worst part is yelling and talking because it feels like it just reverberates inside."

It's not a new sensation.

"He said he's had one pretty much every year," noted partner T.J. Brodie. "He's used to it by now, especially after college."

"I don't know what the deal is," the University of Minnesota product said with a smile. "Once a year I end up in the bubble. Somehow I get hit in the face a lot. I try and think about it, 'What am I doing wrong to put myself in these situations?' But I don't know."

"They are both good players," Keefe said earlier this week. "They are both good defenders. Brodie has been moved back to his strong [left] side. That has really helped with the lefty-righty thing. Puck distribution, making plays and things like that become a little bit easier. Hollsy has defended really well and has been physical. It has been a good, responsible pair. Brodie tends to have that effect on guys that he plays with. It has been nice. Really from the time they got put together in their first game, they seemed to do a good job and they have continued with it."