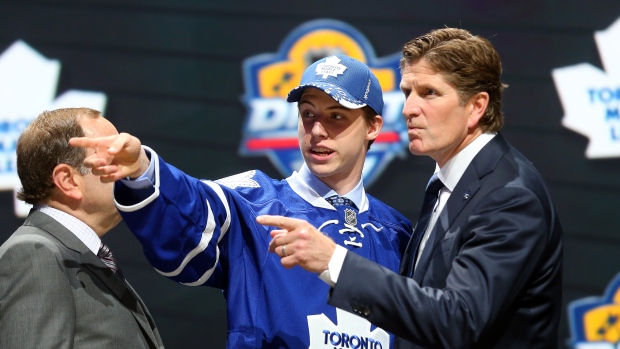 TORONTO – In the days after the Toronto Maple Leafs fired Mike Babcock last Wednesday, a report surfaced that during the 2016-17 season, the head coach asked then-rookie Mitch Marner to rank his teammates from hardest to least hardest working…and then shared Marner’s opinions with the players.

Marner, who is currently sidelined with a high-ankle sprain, addressed that story for the first time following the Leafs’ practice on Monday, telling TSN exclusively that “it was surprising” Babcock decided to share the details of his list with his fellow Leafs.

“I was lucky enough that the guys that were there with me, none of them took it to heart and they knew it wasn't up to me [to make the list],” Marner said. “But it's so long ago now.

“Honestly, I really kind of forgot about it until the report came out but it's over with now, it's done with.”

The fact that his teammates didn’t hold the incident against Marner made all the difference in how he ultimately views the situation and prevented a rift in the dressing room at the time.

“It was huge for a first-year guy,” Marner said. “When I heard about [what Babcock did], I didn't really know what to think. But I was lucky enough to have that first-year group with me and our team was very tight and very well-knit together. That was a lucky situation. But it's over with now; it's out of my head.”

In a text message exchange Monday with TSN Hockey Insider Darren Dreger, Babcock said he apologized to Marner after the incident.

“I was trying to focus on work ethic with Mitch - focusing on role models - it ended up not being a good idea. I apologized at the time,” Babcock said.

What’s on Marner’s mind now is the Leafs’ next chapter and how they’re transitioning under new head coach Sheldon Keefe. Marner wasn’t with the Leafs on their road trip when Babcock was fired and said he was “surprised” to learn the coach had been let go after the Leafs’ 9-10-4 start to the season.

“I was at home when I heard the news and everything,” Marner explained. “I think Sheldon coming in here, just watching him the last two games, he's got a very controlled calmness to him and I think he just keeps the bench calm and it's been fun watching the team.”

Marner flew down with Keefe from Toronto to Arizona last Thursday for the final two games of that Western Conference swing, which turned out to be consecutive wins for the Leafs. That was a good omen for the start of Keefe’s tenure and is all the more reason for Marner to leave his own past with Babcock.

“[What happened with Babcock], that was my first year, I didn't really know what to think of it,” Marner said. “But it's all over with now, there's really nothing I can say. I'm looking forward to the future and the new change and seeing how I can help this team win with Sheldon.”

Unfortunately for Marner, it will still be a little longer before he can re-join his teammates on the ice.

It’s been over two weeks now since he suffered an ankle sprain in the second period against Philadelphia, an injury that will keep him out of action for at least a month. Monday marked the first time Marner was back on the ice since getting hurt, testing out his ankle with Leafs skill development coach Darryl Belfry.

“I feel good. Nice to get back [out there],” he said. “It's been a little bit so it was nice to get out there and get some shots in. Most of it felt pretty good. Didn't test [the ankle] really too much, but turning and crossing over and everything like that feel pretty good.”

Marner added that he had no update on the original four-week timeline on his recovery, saying he’s still “week-to-week.”

Also rehabbing an injury is winger Trevor Moore, who hurt his shoulder on Nov. 15. He joined Marner for the on-ice session Monday and has been his constant companion in the gym, a welcome development for Marner in the wake of his injury.

“Me and Trevor are in there trying to get better and stronger,” Marner said. “It sucked when he went out but at the same time I think for both of us it's nice having someone there for each other and to talk to and I think we're just trying to get back and help the team.”

From what he’s seen over the last two games, Marner is more encouraged than ever that the Leafs can get their season back on track and finally blossom into the high-powered, dominant team they aspired to be from the start.

“You could see the confidence in some guys just wasn't there,” Marner said of Toronto’s most recent games. “I think everyone in this room has a lot of skill and ability in their bodies to do a lot of great things and I think people just weren't doing it.

“I think that their minds just weren't thinking freely and you can see the last couple games, a couple of those guys have just gone out there and are having fun with the puck and are doing their skills and doing their thing and it's helped our team out a lot.”​