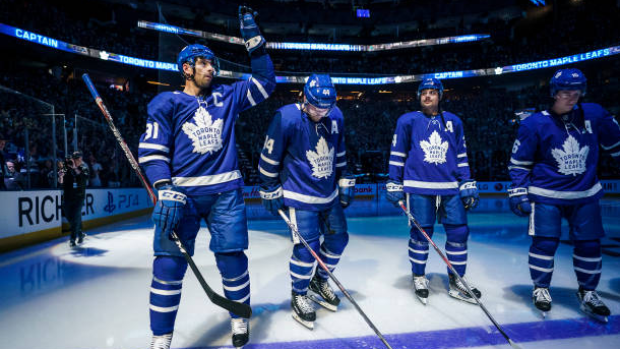 TORONTO – The Maple Leafs had options when it came to naming their next captain, but the longer management mulled the decision, the clearer it became: John Tavares.

And so, the Leafs finally made official what’s long been rumoured, anointing Tavares the 25th captain in franchise history during the ceremonial lead-in to their first game of the 2019-20 regular season on Wednesday, a 5-3 win over the Ottawa Senators.

“We thought we had a number of players that could carry that honour, and just decided as a collective group that John fit the role the absolute best at this time,” said Leafs general manager Kyle Dubas. “He’s everything we thought he would be and there is nothing negative about him whatsoever. We haven’t learned anything new about him since he’s come here and I think that’s really, in the end, the reason for it.”

Much to Tavares’ delight, Toronto enlisted the help of his wife, Aryne, and newborn son, Jace, to deliver the good news on Monday. The team’s PR director Steve Keogh devised a plan where Aryne would come to Dubas’ office and, unbeknownst to Tavares, his three-week-old son would be outfitted with a new Leafs’ sweater bearing the ‘C.’ So when dad came in to find the little one, he got the message loud and clear.

“I’ll never forget that moment,” Tavares said. “It’s been an amazing three weeks. To see him there with it on, to be the one to tell me, was very emotional and really, really special. It’s hard to really describe it.”

In contrast to that intimate family moment, the Leafs wanted Tavares’ public unveiling as captain to include as much of the fan base as possible, while also honouring the demeanour of the man himself.

Rather than hold a staid press conference, like they did when Tavares signed a seven-year, $77 million free agent contract with the team in July 2018, Toronto opted to have Tavares be the last player introduced during Wednesday’s pre-game ceremony, and come out bearing the ‘C’ for the first time.

“In the end, we decided that we wanted to share it with the most fans we could at the same time,” Dubas explained. “It was kind of an understated way of doing it, without real pomp and circumstance. I know it may have been drawn out a little bit longer than everyone would like, but it fit the person who was getting the honour.”

“It was amazing,” Tavares agreed. “I think from when I found out, and how I found out, to the anticipation of just that ovation and the support from the fan base and go out and play like we did was special. I’ll never forget it.”

Tavares is the first player to wear the ‘C’ for Toronto in nearly three years, since Dion Phaneuf held the role before he was traded to Ottawa in February 2016. It’s a position Tavares had the experience to take over as soon as he signed with Toronto, having been captain of the New York Islanders from 2013 right up until when he defected to the Leafs in free agency. But the timing wasn’t right until now for anyone to take over the captaincy, and Tavares rose to the top with how he carries himself on a daily basis.

Right before Tavares’ new role was revealed on the ice, Toronto announced Morgan Rielly, Auston Matthews and Mitch Marner as this season’s alternate captains. Rielly’s designation will be a permanent letter worn throughout the year, while Matthews and Marner will be rotating alternates.

Matthews was believed to be among the candidates Toronto was considering for its captaincy, and Dubas was clear the team’s decision to name Tavares was not influenced by the recent charge of disorderly conduct levied against Matthews that stemmed from an incident last May in Arizona.

“This was exactly what we had planned when we had discussed well before that,” Dubas insisted. “So [the incident] didn’t affect [this] at all.”

That Matthews and Marner are part of the official leadership group is a sign in itself of how much respect they’ve courted over their young careers, and of how much more the Leafs believe they can develop in that regard. And unofficially, they’re surrounded by plenty of other good examples in the dressing room – Dubas said the entirety of the Leafs’ leadership core includes the four players with letters, but also Jake Muzzin, Frederik Andersen and Zach Hyman.

“The players take control of the team and they set the accountability and that’s how you win in the end,” said Babcock. “It took us a while to get to this point, but we’re excited we’re at this point.”

After the hoopla of the game’s opening ceremony, the Leafs took some time settling in on the ice against Ottawa. The visitors used Brady Tkuchuk’s goal just 25 seconds into the first period to grab a 1-0 lead, and then Toronto squandered three consecutive power plays to remain in that deficit after 20 minutes.

In the second period, the Leafs’ offence roared back, led by Matthews. After Frederik Gauthier tied the game with his first goal of the season, Matthews posted two goals in the middle frame, becoming the fourth player in NHL history to score at least once in the first four season openers of his career.

The Leafs were also aided by their rookie class, including the first NHL goal for Ilya Mikheyev and first NHL assists for Dmytro Timashov and Rasmus Sandin. And on a night where the Leafs were celebrating a new chapter in their history, seeing a new wave of contributors emerge was especially heartening.

“We were borderline dysfunctional [at the start],” said Babcock. “Just tense. Couldn’t move, didn’t skate good. But once we got through that, we played. I was real impressed with the [Alex] Kerfoot line tonight, with Mikheyev and [Trevor] Moore. Everyone knows Matthews was good, I know that too, but it’s those other guys that create depth that allow you to be better that’s important for us.”