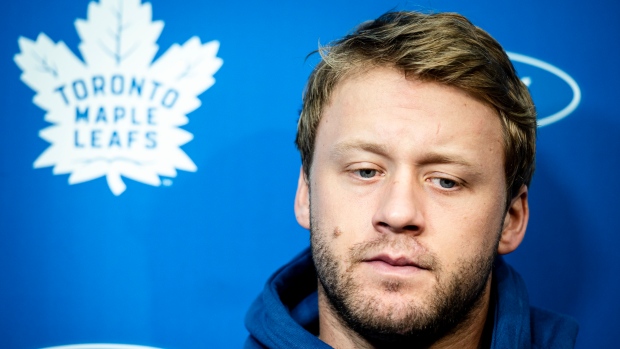 TSN Toronto reporter Mark Masters checks in daily with news and notes on the Maple Leafs, who opened training camp with medicals and media availabilities at the Ford Performance Centre on Thursday before flying to St. John's, Newfoundland and Labrador. The Leafs will hit the ice for their first on-ice sessions of camp Friday in Paradise, N.L.

Toronto Maple Leafs head coach Mike Babcock made it clear what one priority will be this upcoming season.

"One of the things we have to improve the most is playing in our own zone," Babcock said Thursday on the eve of his team’s first on-ice training camp sessions. "If you look at it and where we are strength-wise in the league offensively we are better than we have been defensively."

The Leafs ranked fourth in goals per game (3.49) last season, but 20th in goals against (3.04). The defence has been remade with Nikita Zaitsev, Ron Hainsey and Jake Gardiner leaving and Tyson Barrie and Cody Ceci arriving along with many depth options.

"We’ve got left and right shots in our top four," said Babcock, who only had one righty (Zaitsev) in his top six most of last season. "We need (Morgan) Rielly and Barrie to be allowed to do what they do, and then we need Ceci and (Jake) Muzzin to play defence."

Rielly and Ceci skated together in the informal skates while Muzzin skated with Barrie.

Coming off of shoulder surgery, defenceman Travis Dermott is expected to miss the first month of the season.

"Dermy, if I am not mistaken, is 12-14 games away," Babcock said. "There is a real good opportunity for someone else."

Ben Harpur, Jordan Schmaltz, Kevin Gravel and Teemu Kivihalme ​have been brought in to compete for jobs on the blueline joining returnees Martin Marincin and Justin Holl and promising prospects Rasmus Sandin and Timothy Liljegren.

"I think we’ve done a good job as an organization to increase our depth. Last year, when we lost D (Dermott and Gardiner sustained injuries down the stretch), we didn’t maintain winning. We played tight and we were in it, but we didn’t maintain winning. Part of that is just continuing to improve your depth — that’s with your young guys growing each and every year, but it is also with adding guys that are right there knocking on the door. We think we’ve done that."

"I felt that last year as well," he noted, "but every year that goes by I think you get more and more comfortable with that so I think that’s what management expects out of myself and that’s what I expect out of myself too."

Babcock lauded Matthews for his growth off the ice.

"He arrived a big-time player," the coach said. "There is no question about it. But the comfort in himself and his ability to share himself with his teammates and his ability to lead has gotten better and better as time has gone on, which you would expect from a young man. I don’t think it’s any different from (Mitch) Marner that way. I don’t think it is any different for Rielly that way. You earn the right to be comfortable. I can’t give that to you. You earn that right. I think he’s really grown in that area."

Following the media availabilities on Thursday, Toronto Sun columnist Steve Simmons reported that Leafs president Brendan Shanahan told him the team would have a captain this season.

The Leafs will have a captain this season - Brendan Shanahan told me.
He didn't say who or when. The betting here, obviously, is Auston Matthews @AM34.

"It's a group effort either way," said Rielly, who has served as an alternate captain the last couple of seasons. "I don’t think anything changes after that announcement’s made."

Does he want the job?

The Leafs haven't had a captain since trading Dion Phanuef in February 2016. Last season, John Tavares, Rielly and Patrick Marleau served as alternates.

Asked about the back-up goalie battle, Babcock took the opportunity to address a hot topic in the market: how much should starter Frederik Andersen play?

Andersen played 60 games last season despite missing three weeks with a groin injury. He played 66 games in each of his first two seasons in Toronto.