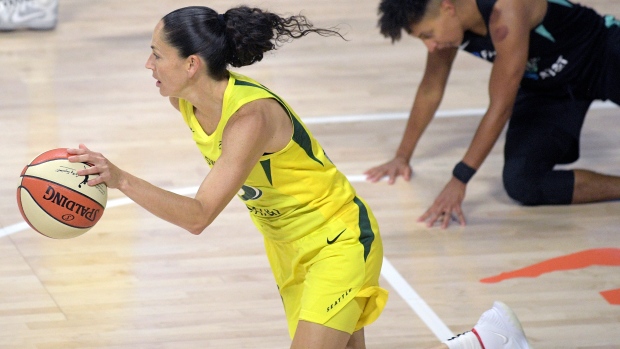 BRADENTON, Fla. -- Breanna Stewart led league-leading Seattle with 16 points despite a poor shooting night and the Storm welcomed back Sue Bird with a 71-64 victory over the Washington Mystics on Wednesday night.

Stewart, the Storm's leading scorer at 19.8 points per game, was only 4-of-17 shooting while grabbing 14 rebounds. Natasha Howard and Jewell Loyd each shot over 50 percent in scoring 13 points each.

Bird, who finished with nine points in 24 minutes, was back in the starting lineup for Seattle after missing the last four games with knee issues that have been bothering her the entire season. She has sat out nine of the Storm's 17 games.

Washington's leading scorer, Myisha Hines-Howard (15.7 ppg), had just two points on 1-of-8 shooting. Emma Meesseman scored 17 points and Jacki Gemelos and Tianna Hawkins 10 each for the Mystics (4-12), who remain outside the top eight that will advance to the playoffs.

The Storm led by eight at halftime before opening the third quarter on a 10-2 run to lead 48-32 with Bird capping the surge with a jumper six minutes left in the period. The Storm led 57-44 heading into the fourth quarter with Washington getting with five twice in the final 1:30.