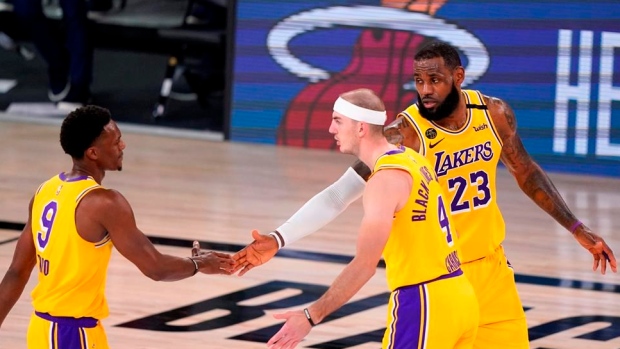 LeBron James can reach a 10th NBA Finals, done by only three greats of the game.

Anthony Davis is on the verge of his first.

The final step for the Los Angeles Lakers shapes up as the toughest.

They have to knock out the Denver Nuggets, who have been on the brink of dismissal from the bubble six times and every time refused to go.

Game 5 is Saturday. The Lakers have ended both their series thus far in five games.

But the Nuggets were also down 3-1 against both Utah and the Los Angeles Clippers, fell far behind in Game 5, and then battled back to not only win the game but eventually the series.

No team had ever erased two 3-1 deficits in one post-season and now the Nuggets need to do it a third time. It's a predicament they could have avoided, if they'd gotten one more defensive stop in Game 2 or given up a few less second-chance points in Game 4.

“These are all close games we’re playing,” guard Jamal Murray said. “Going to keep battling it out.”

Murray was sensational again in Game 4, though James slowed him enough down the stretch after taking on the defensive assignment to help the Lakers pull out a 114-108 victory.

One more win, and James ties NBA career scoring leader Kareem Abdul-Jabbar for third on the career list with 10 NBA Finals appearances. Only Hall of Famers Bill Russell (12) and Sam Jones (11) of the Boston Celtics have gone to more.

It would be James' first with the Lakers after five appearances in Cleveland and four in Miami, and the Lakers' first trip to the finals since winning the last of their 16 championships in 2010.

James and Davis have been the unquestioned catalysts of this run, and they're good strong support from some playoff-tested veterans. Dwight Howard had 12 points and 11 rebounds Thursday in his first start of this post-season, helping send Los Angeles to its overwhelming 25-6 advantage in second-chance points.

“In the post-season, every possession is so important,” James said. “When you can have guys that have been in the moments and can understand and also be able to make adjustments on the fly, and know that you can count on them down the stretch, it just makes the team and you individually feel so much more confident in the outcome.”

The younger Nuggets don't have those type of veterans, but they have the experience of this historic post-season run that could have ended on Aug. 25, the night of Game 5 against Utah. A month later, they are still at Disney World, still trying to prove that hope is not lost until four games are.

“I think people out there probably think this is exactly where we want them. It’s not. We would much rather be up 3-1, but it is what it is. We put ourselves in this position,” Denver coach Michael Malone said.

“Our team has shown tremendous resiliency and grit in getting out of these before. I have no doubt that tomorrow night we’ll bring that same fight to the game and hopefully we can keep this series alive.”

If they do, Game 6 would be Monday night. If not, the Lakers will be preparing to face Miami, in its first appearance since James left in 2014, or the Celtics, their greatest rival they could tie with a 17th NBA title.

The Lakers won't think about any of that until the Nuggets are finally gone.