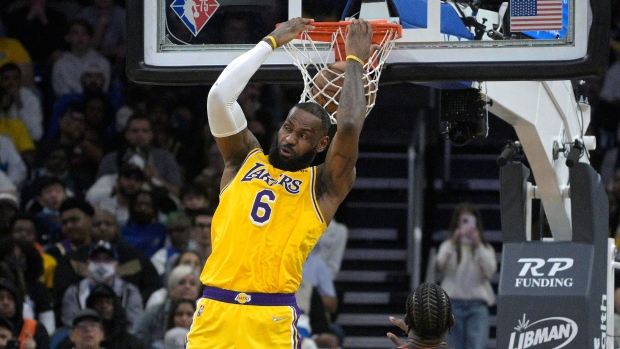 ORLANDO, Fla. (AP) — LeBron James scored 29 points and played exclusively at center in the second half as the Los Angeles Lakers rallied from an eight-point halftime deficit and beat the Orlando Magic 116-105 on Friday night.

Los Angeles coach Frank Vogel replaced starting center Dwight Howard with James to start the second half, and the Lakers opened the third quarter on a 20-2 run. They outscored Orlando 31-16 in the third, making 13 of 23 shots and 5 of 8 3-pointers in the frame.

Carmelo Anthony scored 19 of his 23 points in the second half and hit four 3-pointers, while Stanley Johnson added 11 points and five rebounds off the bench. It was the eighth time the 37-year-old Anthony scored at least 20 points this season.

The Lakers ended a three-game road losing streak, winning away from home for the first time since Dec. 28 in Houston. Friday’s game was the start of a six-game, 11-night trip for the Lakers.

Orlando lost its fourth straight and for the 14th time in 15 games. The Magic led by 10 at the half in Philadelphia on Wednesday and by eight at the break on Friday but lost both games.

The Magic dropped to an NBA-worst 2-17 at home. They haven’t won at the Amway Center since Dec. 1 — a span of nine straight home defeats.

James scored 18 points and Westbrook had 12 in the first 24 minutes, but the Lakers got little else from anyone in the rotation. Los Angeles led by seven in the first quarter, but it surrendered 24 bench points to the Magic in the opening half.

Lakers: Vogel was complimentary of Westbrook’s willingness to adapt his game in order to fit in with his new teammates, saying “he’s all-in on doing whatever is necessary to get the Lakers in position to win a championship, for sure.” ... Vogel said there still is no firm timetable for the return of Anthony Davis (left knee sprain), who was on the bench Friday night.