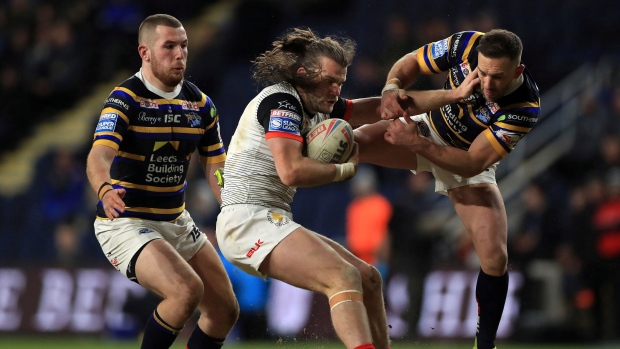 LEEDS, England — The Toronto Wolfpack took it on the chin Thursday, torn asunder in a 66-12 beatdown by the Leeds Rhinos.

The lopsided loss — Toronto's sixth straight setback in the Super League — matched the most points the Wolfpack have ever conceded. They were beaten 66-10 by Warrington in Challenge Cup play in May 2018.

And it came at Emerald Headingley Stadium where Toronto coach Brian McDermott helped Leeds fill its trophy case before he was fired in July 2018.

On Thursday, the former British Royal Marine watched his former club run in 11 tries against a porous Wolfpack defence.

McDermott did not pull punches after the match, calling the performance "as bad as it gets." But he said teams have to endure "these really ugly days."

"That's what environments are built upon — the ugly bits. As well as the good bits," he said.

"You've got to hold your nerve through those really really bad moments, which today is."

Toronto (0-6-0) was coming off a 32-0 loss at the hands of defending champion St. Helens that marked the first time the transatlantic rugby league team had ever been blanked.

The offence let Toronto down last week. This time it was the defence that was cut open repeatedly with Leeds leading 36-6 at halftime. The Rhinos outgained the Wolfpack 881 metres to 426 in the first half with Toronto missing 19 tackles.

The Wolfpack's defence stiffened in the second half, but the damage was done.

Coming off a 36-0 win over Warrington, Leeds (4-1-1) extended its win streak to four games and moved atop the Super League table — at least temporarily with more games to come this week.

Captain Josh McCrone and Jack Wells scored tries for Toronto. Gareth O'Brien booted two conversions. McCrone was sent to the sin-bin in the 79th minute for a professional foul as Leeds pressed for its 11th try.

McDermott, who took over Leeds in 2011, was fired after a 162-97-6 run as coach that saw the Rhinos win four Grand Finals, two Challenge Cups, a League Leaders' Shield and a World Club Challenge.

At the time of his firing, however, injury-ravaged Leeds had lost seven straight in Super League play and nine of 12 matches in all competitions. He signed with Toronto after the Wolfpack failed to win promotion in 2018.

Leeds struck early, with Dwyer bulling his way through two tackles in the fourth minute after a Wolfpack penalty for a high tackle.

There were three more Leeds tries — and one from Toronto — before the 30-minute mark and two more before halftime.

Wells, on loan to Toronto from Wigan, scored in the 52nd minute. Five more Leeds tries followed, often through poor Toronto tackling, including two in the final three minutes.

"We lack a little bit of belief in our defence" McDermott said.

"Hakim's miss on Conrad Hurrell right in the final stages of the game is a great example. He did everything right but just didn't believe in himself enough to make that tackle," he added.

Toronto was without the injured Darcy Lussick (hernia), James Cunningham (hamstring), Brad Singleton (knee) and Joe Mellor (hand). New Zealand international Chase Stanley, who rejoined the team this week after missing the first four games because of visa issues, did not dress.

Toronto beat Leeds 17-16 in their only other meeting, a playoff encounter in September 2018 when Paul Rowley was coaching the Wolfpack.