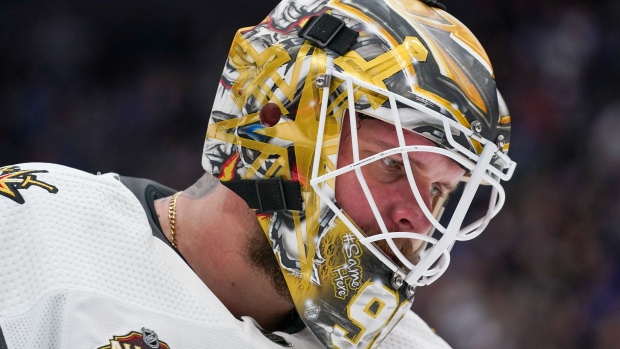 Golden Knights goalie Robin Lehner addressed the media tonight after what he called "probably the worst" performance by the team during his Vegas tenure. He took three questions about the 4-0 loss to the Toronto Maple Leafs and then spent the rest of his media session, which ran nearly 10 minutes, discussing Kyle Beach, the Blackhawks scandal, hockey culture and what needs to change moving forward.

The following is an edited transcript.

On the NHLPA call and the process moving forward ...

"You know everything I'm doing is for Kyle Beach. He hasn't been given the benefit of the doubt for a long time. I think it's time we give him the benefit of the doubt and support him. In regards to yesterday's call, I don't think it's my place to comment on it and what was said. But, I think we have to do more. We have to look into it and do what's right for Kyle. That's the main point, my perspective, and wherever that leads, it leads to, but, yeah. It was tough timing. It was a lot of teams playing games and stuff like that too. So, I encourage more teams to just talk about it and making sure that we're a part of [making sure] this doesn't happen again. It's not just on NHLPA or NHL or anyone. All players need to take this seriously if we want change and culture change and whatever. That's about it for me."

"Well, in the end of the day, you know, people need to be held accountable that knew ... that's part of healing, getting some justice, and that's what we all want. Whatever that process is, I hope we do the right thing."

What's wrong with the culture?

"It's not just in hockey. In all sports, in society in general, right, I mean, it's very, very difficult for anyone in that position with sexual assault or anything in that manner, it's hard to come out. It's hard to talk about, you know, especially if you feel like people don't believe you. You kind of bury it and, in the end of the day, that's the culture in all of society and our league too. We need to be more open, more supportive and we need to have things in place so players, no matter if it's sexual assault or whatever, other problems a player has, they need to have the confidence that they can go to someone and get help."

"As I said, it was good. It was an emotional call. I commended him a lot. He's changing people's life by the bravery of speaking out and I just want to be there for him and support him through this. I think the majority of players I've talked to are all on the same page with that, but, again, it's hard, a lot of media buzz, a lot of things about it. We have to do it the right way."

Do you think this will bring some change and guys won't be as hesitant to talk about things in the future?

"I mean, there's a process to it. It's not something that happens in a day. Recognizing you have a problem and then move on from there and try to pinpoint what can be done and, you know, to be honest, I had a lot of great talks with both NHLPA and NHL before this all came to light with other things and, in the end of the day, we can all do better. I'm not finger pointing at anyone. I just want the new generation of players to have the safety around them to get help if they have an issue, whatever it might be, and, obviously, hopefully nothing like this ever happens again."

Do you feel like you're carrying the flag for player advocacy?

"I don't feel it. Honestly, it's extremely tough for me to do it, but sometimes my principles and how I feel take over. But, in the end of the day, I just want more players, whatever it is, take a stand because, we as players, we can bring change as much as anyone else. Again, it's difficult for me and I wish more people steps up and fight because it's for hopefully my kids, a lot of players' kids, we want them to succeed and play in this league. We want hockey and the NHL to be as good as possible."

"As I said, I'm not going to share any information. I thought that there was some really positive talks. Obviously, everything kind of stopped with everything recently. I think the heart's in the right place to make changes in different ways. If you look at my track record, I'm not a guy that tried to cancel anyone or to get anyone fired. I try to support everyone, but, in the end of the day, we've got a guy that hasn't been heard for 10 years. He needs to get the benefit of the doubt this time and we need to do that properly. But, again, they were really positive talks with both NHL and NHLPA before this and I truly believe that they were sincere in the talks that we had."

Are enough players thinking about change?

"Listen, this is the last thing I finish with, and people can agree or disagree with me on this. It's hard. I think in any corporation, job, company, sport, I try to explain to people that fringe players, the third liners, fourth liners, guys that go up and down, it's been very different treatment in my experience through my, I think it’s, my 12th season now, what I've seen and what, say, star players get. It's not in every team. There's a lot of great teams and Vegas has been amazing and others I've played for, but sometimes it's unfair to put on the star players, too, that they don't speak up because, to be quite honest, from what I've seen, they don't see a lot of the things that need to change. They get different treatment. I encourage everyone to talk to each other, and have conversations, and we need to be a part of and if we talk about culture or whatever, it needs to come from the players honestly. Everyone needs to talk about it."

What drives you to push the conversation forward?

"I mean you guys are asking me. Honestly, it's not that comfortable for me, because I'm trying to focus on winning hockey games, but some things are bigger than winning. I've learned over the years it doesn't matter. I think I played really good today no matter what, but it's hard. I just want more people to get in the conversation. It's not about pointing fingers or trying to get people fired or whatnot, it's about trying to have a conversation about how can we get better. I think that needs to come from players in every organization involved. That’s the last thing I got to say."

Note: Lehner had been requested for an interview by multiple reporters following the team's practice in Toronto on Monday, but was not made available.