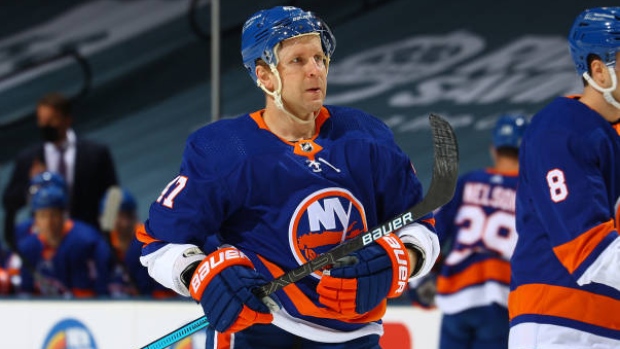 Leo Komarov's time with the New York Islanders appears to be coming to an end.

According to Arthur Staple of The Athletic, Komarov is expected to be placed on unconditional waivers Thursday to terminate his contract. The 34-year-old forward will then sign with SKA St. Petersburg of the KHL.

Hearing this is official now. Believe Komarov will be on unconditional waivers tomorrow to terminate his #Isles contract. https://t.co/1t8nTJyXWw

Komarov appeared in just one game with the Islanders this season, failing to post a point on Oct. 16 against the Florida Panthers. He was placed on waivers two days later and assigned to the AHL's Bridgeport Islanders, though he has yet to report while rehabbing an injury.

The Narva, Estonia native is in the final season of a four-year, $12 million contract signed with the Islanders in 2018. He posted one goal and eight points in 33 games last season.

A veteran of 491 games with the Islanders and Toronto Maple Leafs, Komarov has 63 goals and 170 points over his NHL career, which began in 2012.

He entered the league as a sixth-round draft pick of the Maple Leafs in the 2006 draft.