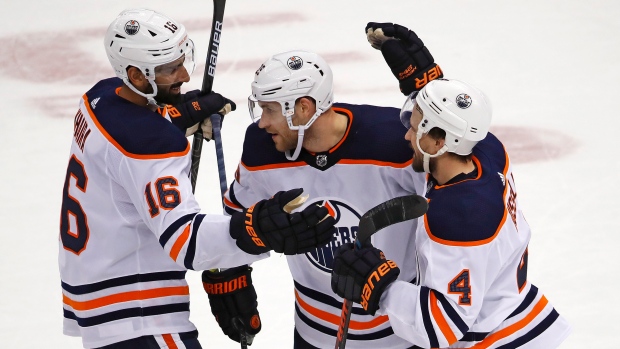 Smith stopped 51 shots and Draisaitl scored in overtime to give the Edmonton Oilers a 2-1 win over the Pittsburgh Penguins on Saturday.

"It was obviously a pretty busy night for me," Smith said. "(Pittsburgh) came at us hard and kind of put us back on our heels. We stuck with it and found a way to get two more big points."

Draisaitl gave the Oilers the second point with the overtime winner.

Draisaitl had Alex Galchenyuk on his back when he flipped a rolling puck past Matt Murray on a breakaway 2:37 into overtime for his NHL-best 13th goal of the season. He's the first Oiler with 13-plus goals through the team's first 15 games since Wayne Gretzky in 1987-88. He's also the first in team history to reach 26-plus points in 15 games since Mark Messier in 1989-90.

Draisaitl had 12 goals and 25 points in October and has seven goals and 10 points during a five-game point streak.

Colby Cave, recalled from the American Hockey League a day earlier, also scored for Edmonton, which has three wins in its last seven games after starting 7-1.

Brian Dumoulin scored a short-handed goal for Pittsburgh, which has lost four of its last six. Murray made 27 saves.

The Penguins previously won six straight over the Oilers. Pittsburgh has not lost at home in regulation against Edmonton since Jan. 10, 2006, an 18-game streak.

Dumoulin tied the game with a third-period short-handed goal on Pittsburgh's 47th shot. Bryan Rust, on the rush, dropped a pass to Dumoulin, who beat Smith to the glove side with 6:46 left. Pittsburgh had a 51-22 advantage in shots through regulation.

"We worked hard," Crosby said. "We had some really good chances and of course we didn't execute. We had enough chances to win the game."

Crosby and McDavid met for the seventh time head-to-head in a battle of generational talents. It was the first time McDavid's Oilers bested Crosby and the Penguins. McDavid finished minus-1 with three shots, while Crosby was also minus-1 with two shots. McDavid, who played his 300th NHL game on Oct. 29, has three goals and 10 points against Crosby and the Penguins. Crosby has two goals and four points in seven games against McDavid and the Oilers.

Both were drafted No. 1 overall, Crosby in 2005 and McDavid in 2015. Crosby, a three-time Stanley Cup champion, has won two Conn Smythe trophies, two league MVPs and a pair of scoring titles. McDavid has won two Art Ross trophies and a league MVP in 2017.

Crosby and the Penguins won the six previous games, dating to their first matchup on Nov. 8, 2016. Six of the last seven games, including Saturday, have been one-goal contests and four of them went to overtime or a shootout. Last season, Crosby scored a memorable overtime goal in Edmonton to give Pittsburgh a 6-5 win.

This time, the Oilers won in overtime.

"Both goalies played really well," Crosby said. "We just couldn't find a way to get more than one. We had a lot of good looks and (Smith) made some saves. It didn't bounce our way."

Evgeni Malkin returned from a lower-body injury to put Pittsburgh at full strength for the first time this season. The Penguins went 7-4 without Malkin, who missed 11 games.

At one point through the first month of the season, the Penguins played without six regulars, including Malkin, four other top-nine forwards and a defenceman on their top pairing. Malkin played 19:45 on Saturday and tied for a team-best six shots.

"You can see the impact he has on our team when he's in the lineup," Penguins coach Mike Sullivan said. "I thought for his first game back after missing a fair amount of time, he had a pretty good game."

Pittsburgh outshot Edmonton 24-10 to begin the game, and 35-15 through two periods, but Cave scored the Oilers' first goal at 7:21 of the second.

Smith kept it close, allowing Draisaitl to come through in overtime.

"He was our best player by far," Draisaitl said of Smith. "He was unbelievable and a huge reason why we won."

Oilers: Begin a three-game homestand against Arizona on Monday