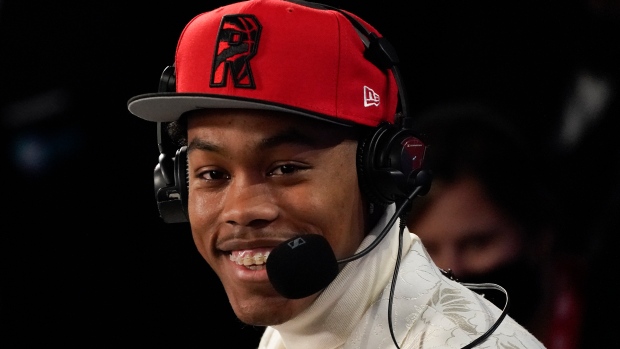 TORONTO – The morning after he was selected with the fourth-overall pick in the NBA draft, and just a couple days before celebrating his 20th birthday, Scottie Barnes was exactly where you’d expect to find him – in the gym.

He didn’t sleep much. How could he? He had just experienced a life-changing, dream-realizing moment. It still felt surreal. A “burst of emotions,” as he put it. But he was also itching to get back to work. So, at around 8:30 a.m., he left his New York City hotel and met his trainer at the National Basketball Players Association facility in midtown Manhattan.

“We just worked out for about an hour, hour [and] 20 [minutes],” Barnes said, after apologizing for being a few minutes late to his media call, a result of New York morning traffic. “Just getting right to work so I can be prepared.”

Those who know him best wouldn’t be the least bit surprised by his early workout session, or by his genuine – but not required – apology to a bunch of reporters he was meeting for the first time over Zoom. But that’s Scottie – the long-armed, high-upside prospect with an unrelenting motor, big spirit and even bigger heart.

“I would say that's just who I am, really,” said the newest member of the Toronto Raptors. “I'm not someone that really holds things back. I'm always happy, I'm always energetic, I'm a loving person, I'm caring, I like to talk about a lot of different things. I love basketball to death but I know how to [converse] with people. I like to get to know people. I'm very open to that. I like having conversations with new people, just meeting them and building relationships with new people.”

In Barnes, the Raptors are getting a player and a young man who fits their organizational ethos perfectly.

“I think it’s a marriage made in heaven,” said Leonard Hamilton, who coached Barnes during the point forward’s lone college season at Florida State.

“What you saw [Thursday] night on TV, his display of emotions, that’s [him]. He’s a guy who’s not ashamed to express his emotions. Sometimes you have some people they have kind of a cool, calm air about them. He’s the complete opposite. He’s emotional, excited and enjoying the moment… Now, don’t mistake that as being loosey-goosey. He’s extremely competitive, but he enjoys competing and he expresses himself that way.”

Physically, Barnes is a unicorn, the type of prospect that teams bend over backwards to get their hands on in today’s game. His measurables are off the charts: 6-foot-9 with an NBA-ready body, a 7-foot-3 wingspan and enormous hands. He’s got the size, strength and quickness to play and guard just about every position on the floor.

“It’s very difficult to physically match up with him,” said Hamilton. “From that standpoint, you’re getting a unique physical specimen.”

He has all the tools to be great, but tools are only as good as what you’re willing to do with them. That’s what makes him a true anomaly. He has this excitable, fun-loving personality, but he also knows how to rein it in when it’s time to go to work, a mentality he credits to the teachings of his stepfather. His emotions don’t limit his ability to focus or strive for individual or team success. If anything, they fuel his passion.

“There were many times where we would be having breakfast on the road, he’d want to hug every player in the room before he’d sit down to eat. He’d want to give everybody a high five when he walks in the gym.

“I often wonder how that’s going to be received in the locker room in the NBA. I mean you’ve got 82 games, so you’re wondering how you can come to work every day with that level of enthusiasm when you’re playing Monday night in Washington and then in Toronto on Tuesday night. But that doesn’t seem to matter to him. He seems to be ready to go if it’s 9 in the morning or 9 at night.”

As intrigued as the Raptors were watching him on the court with the Seminoles, or even going back to high school or his stints with USA Basketball’s junior teams – the length and versatility, his ability to make plays and defend – it wasn’t until they got to know him that they could really envision the fit. By all accounts, his visit to Tampa earlier this month was one of the most impressive pre-draft workouts they’ve seen.

They got to see his competitive spirit and drive up close. They got to learn more about him and what makes him tick. They also started to imagine what was possible, linking an organization known for its elite player development system to a player who won’t rest until he squeezes every ounce of potential from himself, and there’s a whole lot of potential to be squeezed. The thought was too tantalizing to pass up, so they pulled the trigger.

In selecting Barnes over Gonzaga guard Jalen Suggs, who was widely considered to be the fourth-best prospect in this draft class, Masai Ujiri and Bobby Webster opted for upside over making the safer pick and choosing the more NBA-ready player. For them, the decision came down to who they thought would be the more valuable player down the line, in three or four years from now. They looked at the growth in Barnes’ game, particularly over the course of his freshman season at Florida State, and projected it forward. What they saw was a guy who’s only starting to scratch the surface.

Barnes came off the bench for most of the season. He also embraced a new role and position change, primarily playing point guard for the first time in his basketball career. He grew up watching clips of Magic Johnson with his dad. At Florida State, Hamilton wanted him to study the Lakers legend.

“When we sat down in the lobby of the hotel [before the season] and I told him what my vision was for him, it took him a moment to process it,” Hamilton said. “I tried to tell him that there were plenty of 6-9 power forwards and inside players but he could probably count the number of 6-9 point guards on one hand, in college or in the NBA.”

“The people you would compare [his numbers] to would be other point guards who have been playing point guard since they were eight-years-old. He’s only played point guard for five months. So his upside is tremendous and the ceiling is high because he’s still adjusting to making the transition from being an inside player to a perimeter player.”

The biggest question mark surrounding Barnes as he enters the league, and perhaps the thing that could hold him back from reaching his lofty potential, is his jump shot – he hit just 11 of 40 three-point attempts last season. When NBA coaches, executives or scouts would reach out to Hamilton during the pre-draft process, it was often the first thing they asked about. When he spoke to Nick Nurse, he told the Raptors’ head coach the same thing he was telling everybody else.

“I told him that once he saw [Barnes] shoot in the shooting drills he would not ask me any more questions about whether or not he was a capable jump shooter,” said Hamilton, who insisted that Barnes is a better shooter than his role allowed him to show in college.

Still, as Nurse acknowledged just after Thursday’s draft, Barnes’ shot isn’t broken but it may need a tweak or two, as well as plenty of repetition. That’s not something that Barnes shies away from, which is another reason why he and Toronto’s staff are a good match.

For Barnes to get where he wants to go, he knows there’s work to be done. He also knows the Raptors are the right team to help him get there.

“The cake is still in the oven here and he is just beginning to develop as a player,” Hamilton said. “He’s 20 on Sunday and he played one year of college basketball. He’s just getting started. His best basketball is ahead of him, and I feel very confident that because of his sponge-like attitude and his coach-ability, I think you’re going to see him blossom.”

“I love the Raptors organization,” said Barnes. “I felt like that was the right fit for me, where I can come in and bring it with the mindset and the culture that they have. I just knew it fit me.”