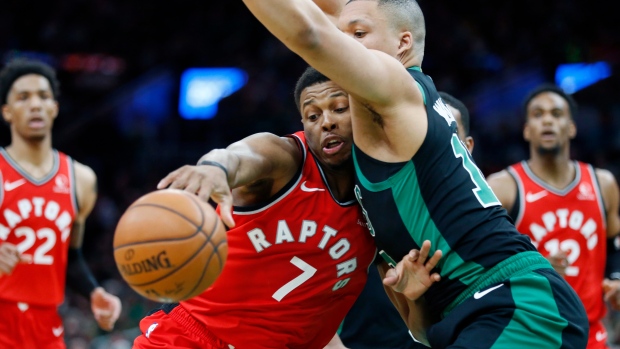 Before he came to work for the Toronto Raptors, and long before he coined the now popular term ‘load management,’ the sports science guru spent 11 seasons on the Lakers’ medical staff, where he won five championships with Bryant.

Most people are familiar with Kobe’s legendary work ethic but McKechnie got to witness it firsthand, every day for over a decade. Few would have a better understanding of what made him who he was as a player, what made him great.

“It was a pursuit of excellence every single day,” McKechnie said. “His drive for perfection, his ability to drive other players was second to none. It was quite amazing.”

On Tuesday, just prior to Toronto’s win over Atlanta, McKechnie shared some memories of Bryant, who tragically passed away at the age of 41 Sunday morning.

After a few minutes he was asked about Bryant’s impact on the game and whether he sees any of Kobe in the players he’s worked with during his time with the Raptors.

He had at least a few good options to choose from. DeMar DeRozan and Norman Powell are both Kobe disciples – California natives that grew up idolizing the Lakers legend and modelling their games after him. They play the same position and have also adopted his mantra of hard work. But a different name came to mind.

“Kyle Lowry reminds me a lot of Kobe Bryant,” McKechnie said. “[He] comes in in the morning, works hard, works at so many different things, recognizes [what he needs to work on]. [He’s] just very similar, very similar.”

On the surface, that doesn’t seem like a natural comparison.

Bryant was a phenom coming out of high school. He found almost immediate success in the NBA, being named an all-star as a teenager in his second season. Lowry was a late bloomer. He didn’t become an all-star until he was 28 and in his ninth season.

Bryant played above the rim, at least for the first half of his career. He was almost always the most athletic player on the court. He took a lot of shots and scored a lot of points but there was always some question as to whether he was making his teammates better.

Lowry has only dunked two or three times in his career and not since the 2015 All-Star Game. He’s generously listed at six-feet and isn’t shaped like most NBA athletes. He’s not the quickest and certainly isn’t the most athletic. Instead, he uses his mind and his body to gain any advantage he can find on the court. His game is less showy. He excels in the nuances – hunting fouls and two-for-ones, taking charges, fighting for loose balls, and securing extra possessions by any means necessary. Much of his value lies in the way he makes everybody else on the floor better.

Their games are very different. Their backgrounds are different, though they’re both from Philadelphia. They play different positions and have different roles.

The similarity is in the way they see and approach the game. Lowry is the first player in the gym every morning and at the arena before games. He’s fiercely competitive, has a passion for the sport and an unrelenting drive to win and get better, and is never satisfied with his many achievements, no matter how great they are. He’s always striving for more and demands as much from his teammates and coaches and he does from himself.

Many of those traits were what Bryant’s persona was built off of – the Mamba mentality. They also helped make him one of the greatest players of all-time.

For Lowry, they altered the trajectory of his career. From a malcontent journeyman and fringe starter, Lowry has turned himself into a perennial all-star, NBA champion, beloved teammate, arguably the best player in Raptors history, and maybe a future hall of famer.

“He’s done a lot, he’s accomplished a lot,” said Vince Carter, the former Raptor star, when asked if he thinks Lowry is the greatest player in franchise history, following Tuesday’s game in Toronto. “He’s been through the ups and downs and he’s been to the mountaintop, so that propels him right there. Obviously, the longer he plays here the more he’s going to accomplish. It’s well deserved. He loves to play. He’s a competitor.”

He’s continuing to build his case, too. On Tuesday, he passed former teammate and long-time Raptors point guard Jose Calderon to become the franchise’s all-time leader in assists. On Thursday, he’ll more than likely be named an all-star for the sixth straight year.

“That’s my teammates and the work my teammates have put in to help put me in that position,” Lowry said. “It would mean a lot. I’d be happy, super ecstatic for it… It would be great and I’d be super excited as always and it would be another milestone that I can [appreciate] when I’m all done.”

“It's special, man,” said Fred VanVleet. “It's special. I think we all should be in the mood of giving people their flowers while we can. It's amazing. It's a fantastic accomplishment for him, his career trajectory, and with the Raptors' history here. To not really have that many long-tenured guys, for him to still be here, still be kicking, still playing at a high level. It's pretty special.”

That the league’s coaches are expected to vote him in as a reserve is fitting and a testament to how far he’s come. In 2013-14 – the season he fuelled Toronto’s unlikely turnaround – he was snubbed by many of those same coaches, thanks in large part to his reputation. He was labelled stubborn and hard to coach – qualities that Bryant was also known for at various points throughout his career.

At 33, turning 34 in March, Lowry is putting together one of his best seasons to date and he’s doing it for a team in second place despite being decimated by injuries. Still, even after all he’s accomplished, many casual basketball fans are still sleeping on the veteran point guard.

Lowry finished fifth among Eastern Conference guards in all-star fan voting last week. He’s not as electrifying as Trae Young, who plays for the worst team in the East. He’s not as marketable as Kyrie Irving, who has missed 28 games. He doesn’t have a MVP award on his mantel like Derrick Rose, who comes off the bench for a bad team. But, despite getting fewer votes than all three – as well as Kemba Walker – he’s been more valuable to his team this season.

Now, it’s the coaches that appreciate his game more than most – the guys that see him up close, understand his impact, and know how much work he puts into his craft.

“If that guy’s not on an all-star ballot considering the last 18 months, the last six months, and where our team is, that's unfathomable to me,” Raptors head coach Nick Nurse said on Tuesday. “And if anybody that has decent knowledge of the game or the NBA would keep him off, well, it wouldn't make sense to me. It wouldn't make any sense to me at all. Not even close.

“I am constantly amazed at the plays this guy makes [aside] from scoring and assisting, all the charges – the ones that I see that nobody ever talks about. I can't believe how many times he rides a 6-10, 250 [pound] guy out of bounds to grab a rebound, at his size. That's going on five times a game, it's unbelievable. And the charges, the hustle plays, and then the game-winning plays. And I appreciate it. We see it a lot, but it should be talked about. I think that's his greatness.”​