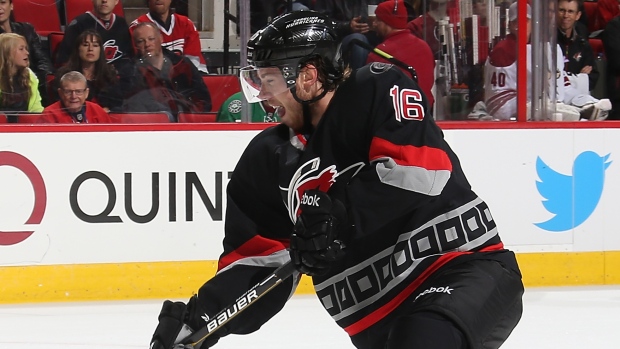 RALEIGH, N.C. - The Carolina Hurricanes kicked off November with the first victory for coach Bill Peters.

Elias Lindholm scored two goals, and the Hurricanes beat the Arizona Coyotes 3-0 on Saturday night for their first win of the season.

Jiri Tlusty also scored for Carolina (1-6-2), and Cam Ward finished with 25 saves in his first shutout since March 27, 2012. The Hurricanes had been the NHL's only winless team in Peters' rookie season as a head coach.

Lindholm, Carolina's top pick in the 2013 draft, collected his first two goals of the season for his second career two-goal game.

The Hurricanes played without right wing Alexander Semin, who was a healthy scratch. The Russian has two assists and is without a goal in eight games.

"We started out on time tonight," Peters said. "The shots were 6-1 and then they got a power play and Wardo made a real good save to keep it at 0-0 and give us a chance to get a lead.

"I hope and think we came out of it healthy. I'm happy for the guys. You saw how hard they worked tonight. When you win you pay a price, and the guys did it tonight."

Ward was all smiles while wearing a fireman's hat that Peters will award on a rotating basis to his choice for most outstanding player in a win.

"Coach Peters came in here and said it will go to somebody every time we win a game," said Ward, who earned his 22nd career shutout. "Really I think he could have given it to anybody. But I'll wear it with pride and obviously it was great to get a win."

The Coyotes (3-6-1) have lost three straight. They had won their last three games in Raleigh going back to 2008.

"We made a couple of mistakes and got behind and chased the game," Arizona coach Dave Tippett said. "That's happened to us too many times this year. We got chances and couldn't capitalize on them, and couldn't get ourselves back in the game."

Lindholm jumped on Smith for two goals in the first.

He followed his own shot and put Carolina in front 3:57 into the game. Brett Bellemore and Nathan Gerbe each got an assist on the score.

Lindholm then made it 2-0 at 17:22 on another follow shot from the low slot, with Riley Nash and Faulk on the assists.

"It took a couple of games," Lindholm said. "We hadn't played good and obviously tonight we did. It's good for the team and it's always nice to get some goals."

Tlusty scored the Hurricanes' third goal on a power play at 15:21 of the second.

Hurricanes captain Eric Staal said the team may have gotten some motivation from Semin's benching.

"It's nice to get a lead and stay on the gas," Staal said. "I thought we were pretty solid all the way through. I think that sent a message to everybody. Obviously Bill's looking for certain things out of people in our lineup, and if he doesn't feel you're delivering that, he's the coach."