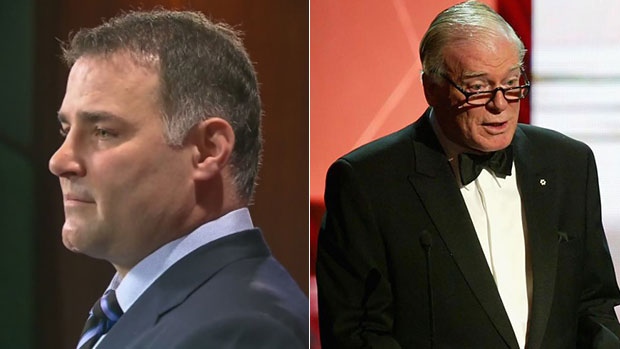 Eric Lindros and Montreal Canadiens’ chief surgeon Dr. David Mulder say they asked the NHL to invest $31 million ­- $1 million per team - in brain trauma research on the eve of the 2017 NHL All-Star Game.

A year later, with the 2018 game less than a week away, Lindros and Dr. Mulder say they have yet to receive an answer from the NHL.

The Hall of Famer and long-time Canadiens’ doctor, who has worked with the franchise since 1968-69, say they made the request during a private two-hour meeting with the NHL-NHLPA Concussion Working Group a day before the Jan. 29, 2017, All-Star Game in Los Angeles.

Lindros and Dr. Mulder did not submit a detailed, written proposal.

“We complimented the league on its progress,” Lindros said in an interview with TSN on Sunday. “And then we talked about research and what’s out there and we asked the NHL if they want to piggyback with the NFL, or do their own thing, or work with any of the universities that are doing amazing work right now.

“We proposed that each team puts in $1 million and let’s see where things fall. It would be a wonderful statement from the league that they want to help do things better. We didn’t ask for the moon. We thought $1 million from each team was the number.”

Lindros said the NHL's reaction to the funding request was muted.

“It was pretty quiet,” he said.

The NHL did not respond to emailed questions about the proposal from TSN.

The 78-year-old Dr. Mulder, who has received the Order of Canada and who was president of the NHL Team Physicians Society from 2003-2006, said it’s disheartening that the league has not responded to the request.

“I’m disappointed because I think the NHL has so much to gain by continuing their leadership,” Dr. Mulder said in a phone interview on Dec. 15. “I think the players are such a big investment. [They] are the key to the game. Every club makes such an enormous investment and to me it would be protecting their value.”

“My message was that even after we figure out all the best rules and prevention, in a collision sport like hockey there will be concussions, and we need better ways to diagnose them and treat them,” Dr. Mulder said.

The meeting was set up after Lindros and Dr. Mulder made a preliminary presentation in November 2016 in New York to NHL commissioner Gary Bettman, lawyer Julie Grand, and Dr. Ruben Echemendia, a Pennsylvania-based neuropsychologist who is the co-chair of the NHL Concussion Working Group.

During that New York meeting, which Dr. Mulder said also lasted about two hours, Lindros said Bettman suggested the NHL would host a symposium to bring together the best minds in the medical business to discuss brain injury issues in hockey.

“I haven’t heard anything from anybody,” Dr. Mulder said.

Head injuries and brain trauma are among the most polarizing issues in hockey. For several years, the NHL has battled a proposed class-action lawsuit filed by about 150 former players who allege the league could have done more to educate them on the dangers of concussions, and of returning to play immediately after suffering brain injuries.

Chris Nowinski, co-founder and executive director of the Sports Legacy Institute, a nonprofit organization dedicated to solving the sports concussion crisis through education, policy and research, said the NHL should be funding research despite the high-stakes lawsuit.

“The NHL has no excuse for not funding brain injury research,” Nowinski said in an interview. “Other leagues like the NFL continued to fund research during litigation. It’s simply the right thing to do.”

In September 2012, a year after former Atlanta Falcons safety Ray Easterling became the first of 4,500 plaintiffs in the NFL concussion lawsuit, the NFL donated $30 million (U.S.) to the National Institutes of Health for brain research. By 2017, however, the agreement expired with more than half the money unused because of disagreements over how to spend the research money, ESPN reported.

The NFL announced the reallocation of more than $16 million of that funding earlier this month.

Lindros, whose own career was derailed by a string of concussions and who pledged $5 million of his own money in 2007 to the London Health Sciences Centre, said he believes the NHL has stalled on the request because of the concussion litigation.

“I think much of it has to do with the lawsuit, the pending lawsuit, and that’s really too bad,” he said. “When I look at the NHL, and I’ve been watching a lot more games lately, [concussions] are the only big issue I’m worried about for the game. Concussions will occur for sure. But we need to keep our guys safe. It’s always been preached the players are the game. So let’s take care of them.”