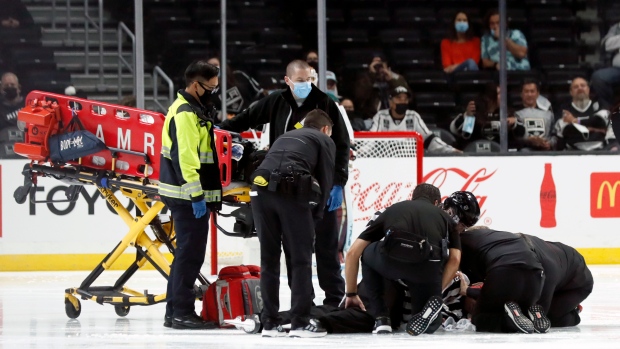 NHL linesman Ryan Gibbons was taken off the ice on a stretcher after colliding with a player moments before puck drop between the Arizona Coyotes and Los Angeles Kings Tuesday night.

The incident occurred following the national anthem when Coyotes forward Liam O'Brien collided with Gibbons while he was skating past him.

Linesman Ryan Gibbons, who is officiating the Coyotes-Kings preseason game, just went down after colliding with Coyotes forward Liam O'Brien while O'Brien was skating past after the anthem. It looked like contact to his head, which spun around. He's being attended to by trainers.

It appeared Gibbons hit his head during the collision and was down for several minutes before he was carried off on a stretcher.

Gibbons has been a linesman in the NHL since 2015.