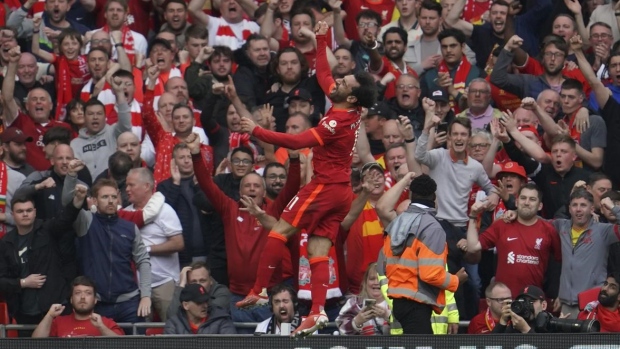 LIVERPOOL, England (AP) — Only a few minutes remained in a tension-filled first half at Anfield when the chant from Liverpool’s fans swept around the stadium.

“Steve Gerrard, Gerrard,” they sang with gusto, and increasing optimism.

Could it be happening? Could Gerrard — the Liverpool great and now Aston Villa manager — really be helping his former club to a Premier League title he never won as a player in 17 years with the Reds?

On a final day of oscillating emotions in the title race, Liverpool did its part by beating Wolverhampton 3-1 at home but needed Gerrard’s Villa to take points off Manchester City at Etihad Stadium to snatch the trophy.

Villa took the lead near the end of the first half, doubled its advantage through another former Liverpool player — Philippe Coutinho — but wound up conceding three goals in five minutes to lose 3-2.

City was the champion again. Liverpool was second again, one point back, and its bid for an unprecedented quadruple of major trophies ended in agonizing fashion.

“You can’t do more than give your absolute best and that’s what the boys did again,” Liverpool manager Jurgen Klopp said. “We chased the best team in the world to the wire, that’s absolutely special.”

Liverpool might have missed out on a record-tying 20th English league championship but it is still an extraordinary season for Reds, who have already won the FA Cup and League Cup.

It could get better yet, with Liverpool’s players having the chance to win perhaps the biggest trophy around when they take on Real Madrid in the Champions League final in Paris on Saturday.

Liverpool likely will have to do so without Thiago Alcantara, the silky Spain midfielder who came off with a right hamstring injury in the final moments of the first half.

However, Mohamed Salah made a goalscoring return from injury, netting the team’s second — in the 84th — after coming off the bench and center back Virgil van Dijk was at least fit enough to make the bench against Wolves.

And, amid the frustration and disappointment, the day ended with cheers among Liverpool fans as Divock Origi came out to a guard of honor after full time to mark his final appearance at Anfield. The Belgium striker, a scorer of some crucial goals down the years since joining from Lille in 2014, was unavailable against Wolves because of injury and appeared to be hobbling as he emerged from the tunnel to applause from teammates, coaches and supporters.

“Football Without Origi is Nothing,” read one banner held up by fans.

Wolves had little more than pride to play for but made life difficult for Liverpool, taking the lead in the third minute through Pedro Neto after Liverpool defender Ibrahima Konaté misjudged a long ball forward. It allowed Raul Jimenez to run through and cross for Neto to tap in at the far post.

Sadio Mane equalized in the 24th after latching onto a deft back-flick by Thiago and placing a left-foot shot beyond goalkeeper Jose Sa.

And Liverpool wound up fulfilling its part of the final-day bargain, scoring through a close-range effort from Salah and then Andrew Robertson in the 89th.

By then, City had completed its comeback at the Etihad and a subdued atmosphere greeted the final whistle at Anfield.

There was still pride, though, at a team which never knows it is beaten.

“We’ll be disappointed inside — we’ve been in this position before,” said Liverpool captain Jordan Henderson, whose team finished a point behind City in the 2018-19 title race. “But it’s tough when you are hearing cheers and Wolves are making it difficult for us.

“We kept believing. We always believed that we could find a way to get the three points, but unfortunately it wasn’t enough.”