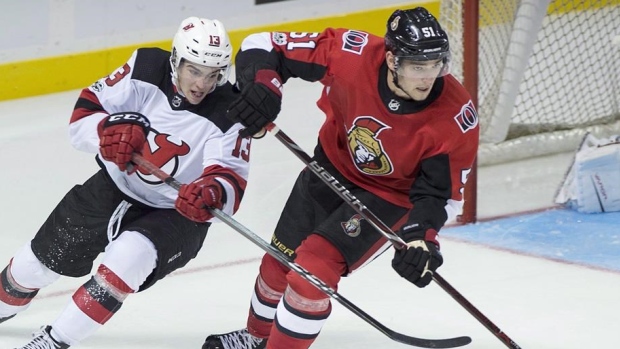 After Logan Brown was one of the final cuts for the Ottawa Senators last week, his agent, Andy Scott, voiced his displeasure with the team's development of the 21-year-old on Thursday.

Scott told TSN Radio 1200 Ottawa that he believes the Senators haven’t put Brown in a position to succeed since selecting him 11th overall in the 2016 NHL Draft.

"I can say with full confidence, that I've really never seen another player met with such resistance by the team that drafted them early in the first round," said Scott, whose clients include Leon Draisaitl and Kaapo Kakko. "From Day 1, I really have seen Logan have to grind and claw and work his tail off for every morsel of opportunity that he's been provided. Whereas with some of these other guys, these elite players like Logan, it's a little bit easier. They get paired with top lines, top players, put into positions to excel and case in point, you look at last season and he shows up and is on the eighth line, he's the eighth-line centre. This is your 11th overall pick from the 2016 draft. He's played no more than two games in all the years he's been here playing with NHL wingers.

"It's one of those situations where I think the prior coach in Guy Boucher for some reason or another, he never took a shine to Logan, but with the new coach D.J. Smith, I certainly think that's a huge step in the right direction. This coach has a track record of really working with young players and getting the most out of them and I think he'll be very, very good for Logan, very good for Ottawa.  But, from 10,000 feet, when I look at this situation, I see a team that is in the throws of a rebuild and just driving around Ottawa you see the slogan for this season is 'The Kids are Alright,'  and if the kids are alright, then play the kids. Why is Logan Brown not being groomed to be the next first or second-line centre?

"By the way, the Senators are saying all the right things with respect to Logan Brown. That he's going to be an integral part of this rebuild, part of the future of the Sens, it's just disappointing to see them not rally around him at this early stage. He's been very positive about everything, he's down in the AHL, he'll be up before long and I'm looking forward to the day when the Sens embrace this kid once and for all."

Scott: Senators are not giving Logan Brown a fair chance

Agent Andy Scott on the slow climb of Logan Brown in the Senators organization.

Brown, who was assigned to the AHL on Sunday, had no points was a minus-2 in four preseason games.

He appeared in two games with the Senators last season, again posting no points and a minus-2 rating. He scored 14 goals and 42 points in 56 games with AHL's Belleville Senators.

The Raleigh, N.C., native has one assist in six career games with the Senators.