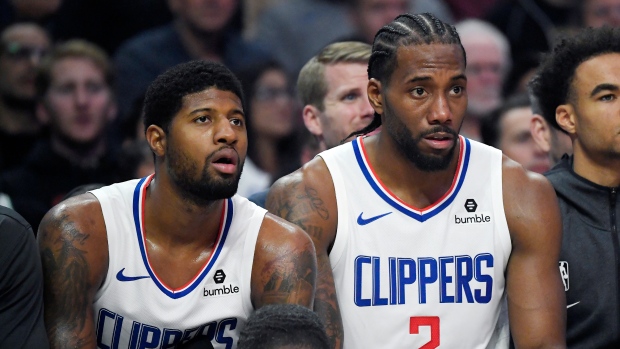 The Los Angeles Clippers say Kawhi Leonard and Paul George have been ruled out for Tuesday's game against the Atlanta Hawks because of health and safety protocols.

ESPN's Ohm Youngmisuk reports Leonard and George are not flying with the Clippers to Atlanta. Depending on the extent of the league's protocols, they could potentially re-join the team at some point during their road trip. L.A.'s road trip is scheduled to last seven games, wrapping up on Wednesday. Feb. 3 against the Cleveland Cavaliers.

Kawhi Leonard and Paul George are not flying to Atlanta with the team. Depending on the extent of NBA protocols, Leonard and/or George could potentially join the team on this road trip. https://t.co/0WUPPIfD5v

Meanwhile, the team also says fiery point guard Patrick Beverley is also out against the Hawks because of right knee soreness.

The Clippers are tied with the Los Angeles Lakers for first in the Western Conference.