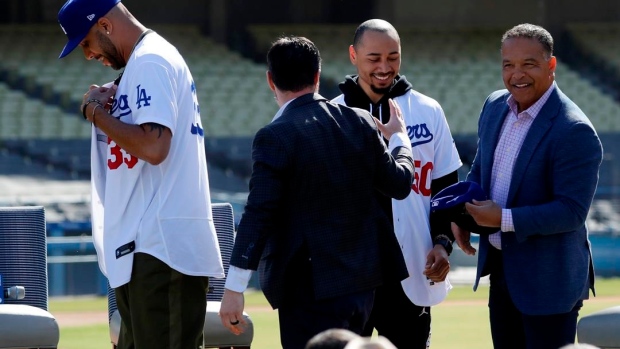 GLENDALE, Ariz. — Los Angeles Dodgers manager Dave Roberts opened spring training Thursday with his confidence boosted by the acquisition of Mookie Betts, who could prove crucial to the franchise’s quest to win its first World Series title since 1988.

Betts, acquired from the Boston Red Sox this week in a multi-player deal, gives the Dodgers two recent MVPs in the outfield -- Betts, the 2018 AL MVP, in right and Cody Bellinger, the 2019 NL MVP, in centre.

Betts’ potent hitting could provide scoring opportunities that weren’t there during the Dodgers' run to the World Series in 2017 and 2018, Roberts said. Betts played for the Red Sox during Boston’s 2018 Series victory over the Dodgers.

“Mostly, we just have to play better,’’ Roberts said. “Looking back, we haven’t played our best baseball in post-season. Betts makes us a lot better.’’

Roberts tried to move beyond the Houston Astros’ cheating scandal. MLB Commissioner Rob Manfred disciplined the Astros after he found the team broke rules by using electronics to steal signs during their championship run in 2017, when they beat the Dodgers in the World Series, and during the 2018 season.

“Our stance is what happened, happened,’’ Roberts said. “There’s nothing we can do to change it. So, to focus on who’s involved or not involved really doesn’t change our outlook on things."

Roberts said he understood why players and fans are angry over the scandal.

“Absolutely, I understand that,” Roberts said. “You guys have a job to do. Fans, players. I absolutely get it."

“The game right now has more talented players than ever, I think," he added. "I think it’s an exciting time. I really do. Baseball fans are resilient. I expect us, as a collective body, to really move forward to 2020 and beyond.”